I don’t know if you remember reading our Wooden Train Set review earlier on this year where we reviewed a rather lovely BigJigs Rail Set from PlayMerrily Toys. Well, I thought I would do a follow-on post to tell you a little more about our new wooden train set. I say new because even though it’s several months old now, it’s in the same condition as it was when it came out of the box. Safe to say it’s endured many toddler tantrums and teething attempts from the baby.

We’ve been such a fan of it that he now owns the BigJigs Wooden Roadway. Out of all the toys Oli owns these are the one lot which is touched every day, at some point throughout the day I can guarantee you that his rail & road tracks are built by him and into some amazing shape which is different every time he puts it together. Maybe the endless possibilities are one of the many reasons it doesn’t sit in the corner gathering dust like some of his toys. 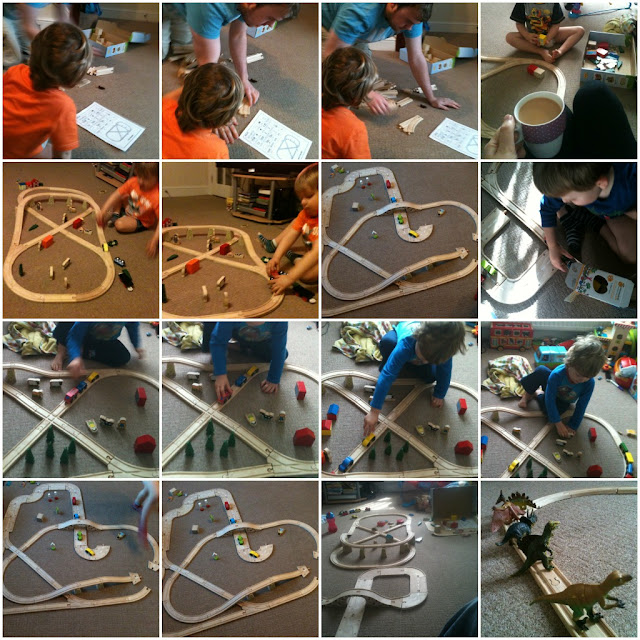 For Christmas I’ve recently been purchasing accessories via PlayMerrily to add on to his tracks, starting with one which connects both his train set and wooden roadway together. I’ve been buying him so more trains for the tracks. Knowing that his tracks are so well played with fills me with so much excitement, I just know that come Christmas day, all these train/road track accessories are going to be his favourite presents. I’m rather sneaky at the same time knowing that all these wooden toys that I’m buying for the toddler will one day be played with by the baby and any other future children. I can’t recommend these wooden tracks enough; they would make a fantastic Christmas present for the toddler in your life.

Has your child got a toy that they play with every single day?