I cannot tell you how excited the toddler was when he received the Fisher-Price Wheelies Loops ‘n’ Swoops Amusement Park to review. It was only the day before that he was glued to the TV as he saw it on an advert, I think WOW was his initial reaction. I bet I’m not the only one who gives the response of ‘see what you get for Christmas’. It certainly was like Christmas had come early for him as we were opening the box together.

Putting it together wasn’t that difficult, it did need the help of a screwdriver to secure parts in place but other than that it was a clip in job. It took me about 10 minutes to put together including popping some stickers on to it, so no need to worry about it taking a while to build come Christmas day and you have an impatient toddler waiting for it to be built. 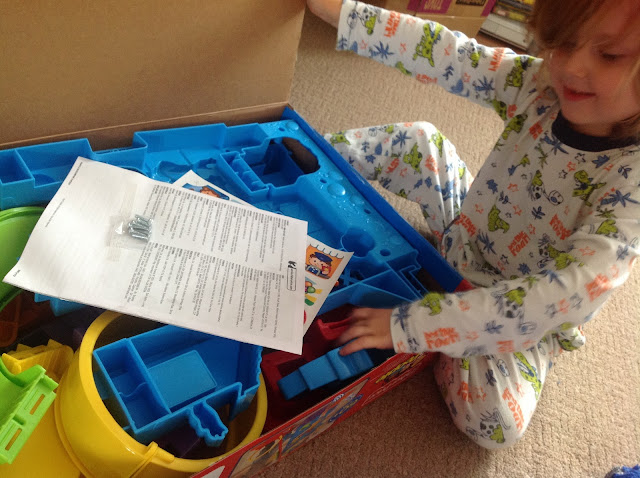 Like with all the Fisher-Price items I own, and a big reason why I purchase them for my children is the bright colours. Not only are they fun, but they look fun and inviting. The Wheelies Loops ‘n’ Swoops Amusement Park from the front looks great, and after you add the stickers it helps to bring some life to it but from behind it doesn’t look too appealing but then I think that’s just me being picky.

Play wise, Oli spent the first few days playing non-stop with it, and now it’s only just played with now and again. I have a suspicion that it has something to do with his age, I’m looking forward to passing it onto Dylan and watching him play with it as he grows. Certainly will make a great toy to share and play within the playroom. 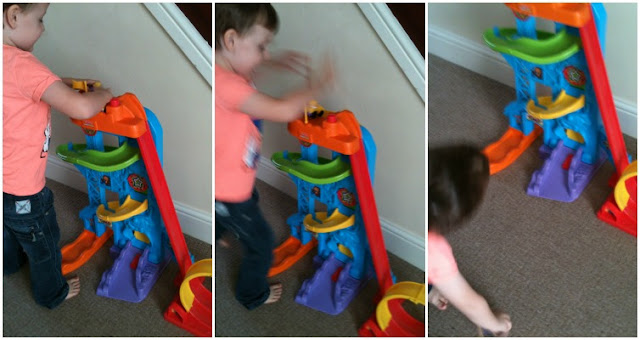 I’m not sure I would pay the RRP (£44.99) for it but then I think this may be down to not currently being in the car phrase, he goes through certain stages where it’s all about one kind of toy but then returns to it. So maybe next week, the only toy he might want to know about will be this one. That and the fact I’ve packed all his little people cars away. It comes with two cars, but I wonder if to make it even more exciting for Oli that I should add some more cars to it. Whenever we have other little friends round to play, it’s the first toy they head for, so it’s gone down with his younger friends. I think it could make the perfect Christmas present for a 2-year-old, that age was the age that Oli really started to get into his cars and the Fisher-Price Wheelies Loops ‘n’ Swoops Amusement Park would be a great way to introduce them.