I did, and I did with Oli’s too, I still have it in his memory box waiting for me to put it into his scrapbook. When I think about why I’ve kept them, I guess the answer is that that part of me which is a hoarder wants to keep anything and everything related to them. As angry as I am with the hospital for putting my maiden name on Dylan’s hospital tags I’ve still kept them because that’s something that he wore and was from his first week.

I’m rather soppy with the fact that it was something that connected us and I like to be able to show that to the kids when they are older and show them this cord which connected us. Though they probably wouldn’t ask or even want to know at that age. I like the thought of having it as a keepsake and coming across it myself in years to come and be reminded of that physical connection we had when I was carrying them. 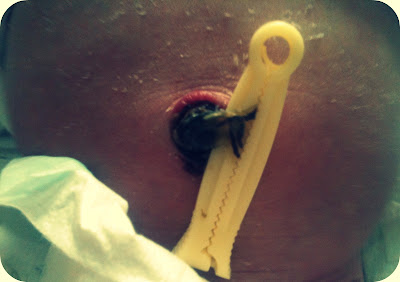 I know that some people would find that rather disgusting, after all, it did have blood pumping through it and of course, it still has that kinda colour to it. The husband finds it disgusting but then he’s not a big fan of anything bodily related, I dread the day he has to deal with a nosebleed or a cut on the kids by himself. I guess if I myself was disgusted by the whole cord thing I could have just kept the clip around it but then I wasn’t disgusted and I want it as a keepsake for the baby scrapbooks.

Did you keep your baby’s cord?