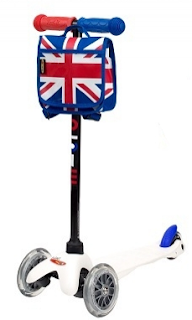 Oli was lucky to be sent a Mini Micro White Union Jack Scooter from the guys at Micro Scooters, what with it being the summer holidays – we’ve been having lots and lots of fun with it. While I take my wheels (Dylan in his pram!) to the park, he takes his scooter, much more fun for him than having to walk alongside his brother and me. It’s also made a great replacement to the pram seeing that we ditched it the moment he turned 3.

I instantly took a love to the micro scooter; I remember as a child having a metal one, and I was constantly bumping my legs on it and having bruised shins. Well, this scooter is made from plastic which will not leave any nasty marks like mine did if my son was to fall over with it. Though saying that he’s not fallen with it yet, the recommended age for this scooter is 3-5 and my three years old shows you just how well it suits him and his age.

He somehow knew how to use it the moment we had got it out of the box and had put it together, which itself was a simple process of just clicking the handle bar into the main body of the scooter. He stood up straight, put one foot on the scooter and the other on the ground and kicked himself off. Then he scootered around like he’s been doing it since he started to walk! The handle grips are soft but at the same time firm enough to provide enough grip for the littlest of hands.

Would we say the scooter is good value for money? Yes we would, the design is fantastic and provides enough support for his little body and is sturdy enough to take the toughest of toddlers (he often let’s his bigger cousin play on it!) The great thing is, is that when Oli grows out of this on moves on to the Maxi Micro we can pass it on to Dylan or get him the Mini Micro Seat which will allow him to use it from the age of one upwards.

Not only do you get a scooter but it also comes with a Union Jack bag, Oli’s often been ditching the scooter and just playing with his bag. The rucksack fits perfectly on his little back and can often be found carrying his cars or dinosaurs, though I think it currently stores his crayons. 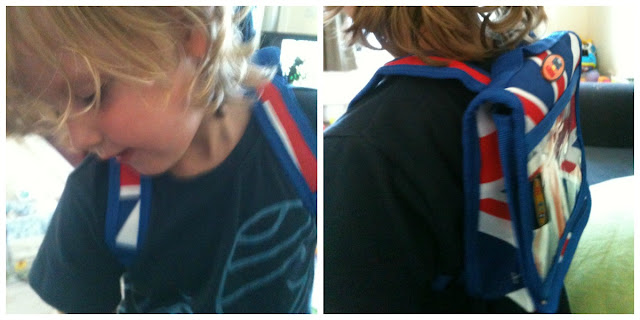 Here’s a video of Oli having fun around the garden with it, I kept forgetting to get one of him down the park. But then this shows just how versatile the wheels are; he can ride on the grass just as smoothly as he can on concrete.

The Mini Micro Union Jack Scooter is a limited edition model made to celebrate this special year, what with the Jubilee and this summer’s sporting events we all feeling rather patriotic. The scooter is available for £64.95 and comes with FREE UK mainland delivery.