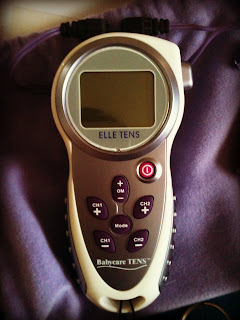 I mentioned a few weeks ago that I was hiring out a TENS machine as I plan on using it as my first form of pain relief, of course, I plan on popping some paracetamols first, but I’m sure that will shortly be followed by having to put the TENs on. It’s not too foreign to me as I used one with Oli in my first pregnancy, though that was what seemed like a lifetime ago so have had to familiarise myself with it again.

When my contractions started in the first pregnancy, I went as long as could without anything. Had the warm bath and by the time they had got closer it was time to go into hospital, so I was wearing it in the car on the way to the hospital and right up until I tried another bath at the hospital and then traded it in for some good old gas and air. It did work a treat for me helping to take my mind off those contractions so thought it ideal having one again this time around, especially for the homebirth.

What is a TENs Machine?

Well, it stands for transcutaneous electrical nerve stimulation and comes in the form of a small box. It has four wires coming out of it which connect to sticky pads, which are stuck to the back. When turned on the TENs gives out little pulses of electrical energy which you can control using the buttons on the machine. As contractions get stronger, you can use the boost button to help relieve that pain. 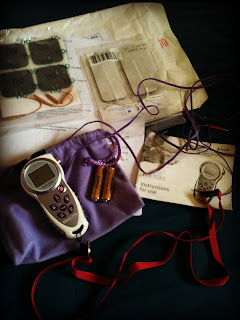 Before someone mentioned one when I was pregnant that first time, I had no idea what a TENs Machine was. Never came across one before and probably would have never used one if this person didn’t tell me about it, making me get one in curiosity. It wasn’t something I bought either; you can hire them out from various pharmacy’s/big supermarkets or as I did online. All you have to do is a quick google search to find someone who hires out TENs Machines. The one which I’ve got is the same as the one I used with Oli so it will be familiar to me.

Hiring out is simple, just pick which TENs Machine you want and then tell them your due date and then they will usually send it out a few weeks before your due date. Of course, it isn’t for everybody but seeing as it worked for me the first time around, I’m hoping it will do the trick again. Did you use a TENs Machine?