I did want to try and tweet my way through my labour and document it in this way, but the contractions were pretty much there as soon as I woke up and I didn’t get chance to use my phone despite it being next to me all along while I was wiggling around the floor. Did make me smile when I saw lovely messages pop up on my screen, but then, of course, another contraction would just pop along so then it was back to my floor dancing. I half expected to see my twitter stream when looking back full of cursing and rants about labour pain, think I was good and only dropped in a couple of naughty words – so maybe it was lucky I didn’t tweet as much as I had planned.

This tweet I sent just before going to bed, I didn’t realise until I looked at the time on this tweet that I went to bed so late. I thought I went to bed at a decent time, no wonder I was so tired. I was up a few hours later, so I was right with saying ‘maybe in the early hours’.

Ha, it turned out I just needed the toilet and that pushing sensation soon went after that. This tweet just reminds me that the pain was pretty intense from the moment I woke up. She did arrive quickly after being called though.

I realized that all the lovely people I had been exchanging tweets with over this pregnancy/last couple of weeks would be asleep. I guess this is one reason I cast the phone aside, gesh – you guys just had to be asleep when I was starting didn’t you.

I love the fact that I did the typical thing of screaming that I didn’t want to do this, bit too difficult to go back and change that. Though of course, he was totally worth it.

It’s lucky she didn’t break my waters anyway as he had pooed in them, and she said that if they had popped any earlier, then I would have been taken into hospital.

Might have helped if I had my TENs on right (see my birth story) then that might of took away the pain much more, but I doubt it would have had much difference. Over two hours they just increased in pain and became more unbearable.

So I started on the gas and air about an hour before he was born, see it was handy tweeting because it’s helped build a time frame in my head when I did things like start on the entonox.

Again would have probably helped more if I had used it right, though was still a godsend and I see that I was still using it right up until I gave birth. 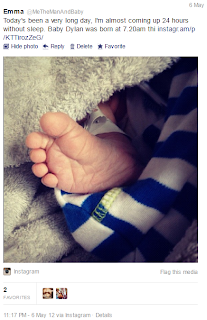 After Dylan was born at 7.20am, we were taken into hospital. I didn’t get chance to share any news until that evening when I shared a photo of that gorgeous little foot of his. I guess then onwards my tweets were all about our stay in the hospital, and I think I’ll look back at these to help piece together those six days I spent there. Most of it was spent with me being in a blurry state so trying to remember my son’s first days have been a little difficult.