It’s strange reading back through the last blog post I wrote last Saturday – he’s teasing me, it talks about how I thought my body was teasing me and I didn’t quite know what was going on it. I guess reading it now, it was all starting to kick off that day, and I find it quite funny how I signed the post off wondering if things were going to happen that night. Well, it did.

I went to bed early-ish like I remember doing with Oli the night before, guess it’s my bodies way of telling me that I’m going to need that sleep. The first I know of anything happening was when I woke about 3 am to go to the toilet; I remember sitting on the toilet thinking ‘ouch’. I really was hit with this sudden pain, going back to the bedroom I realized that this was it – contractions had started. They were pretty intense straight away, no slowly getting into it. We both came downstairs where I grabbed the house phone and rang the ambulance control number I had been given, I’ve already phoned them twice in the week so already knew what to expect. I told them I was having contractions and gave them my details as planned; they said they would page the midwife who would then phone me.

Until this call happened, I spent my time riding around the living floor on all fours, attempting to clear up Oli’s toys from the night before in between my contractions. I was so pleased when the phone rang to hear a familiar voice down the phone, the midwife that was coming over was someone who we had already met and had got to know over the last few weeks. She knew this was it as she was chatting the day before with the midwife who did my sweep and they said that I would probably go into labour either the Saturday or the Sunday. So I didn’t really need to explain anything to her, she said she’ll see me soon. In this time the man got out our home birthing box and the entonox and put it in the living room ready. She was here within like 10 minutes which isn’t bad considering she had to get up, get dressed and drive over here. I think the time when she arrived after all the calls and stuff was half 3, by now the contractions were enough for me to have the TENs Machine out.

I really should of had a practice with the TENs, just because I had used it 3 years before didn’t mean I would remember how to use it this time around. This was proven during labour when at first I was only upping the one side and not upping the both sides at the same time and then again when I was completely turning it down/off when the contractions were not going on, when I should of instead kept it at a low to feel that numbing effect. I kept with the TENs for a couple of hours until it really got too much and I needed that gas & air. Think it was around this time that my midwife phoned the other midwife to let her know that she’ll probably be needed soon that’s always a smiley moment when you know that things are getting near. Somewhere around here the man came and rubbed my back, it was like he had read my mind. That and I was forever shouting ‘get the tens outta my arse’, the wire get sliding into the wrong place thanks to me being on all fours, it was only afterwards that the man told me had considered getting the tape out to tape the wires to the side as me as I was repeatably asking for the wire to be moved.

Obviously, one of the first things after my bottom half came off was that the shower curtain was put down, we decided to go with the living room floor in the end as the choice of birth. I think this was mainly because Oli was still in bed and I didn’t want to be in the room next to him making noise, though judging by the day before when he continued napping on the sofa despite the smoke alarms going off – he would of probably just slept throughout it all. The shower curtain was much comfier then I thought, and I guess the comfort of what was below me was the last thing on my mind. I had originally planned to chuck some old duvet sheets down too, but I just stuck with the curtain. Though has the time went on, and I continued to be on all fours I had some cushions placed under me to make it more comfortable.

My waters still hadn’t broken, and I was disappointed when a couple of hours in I was still at 5cm, that bugged me as I remember being 4cm a couple of days before when the midwife came out and did my sweep. Both the midwives kept saying how my waters were bulging; I remember at one point begging them to break them as I remembered quickly jumping up that cm when my waters got broken with Oli. They were laughing as I said this, I guess they knew it was all going to happen naturally and would happen soon. I was cursing everyone in my head, they and the man sat on the sofa as I wiggled around the floor in pain. I think at this point he was really glad on the fact I decided on home birth, though he did grab his Xbox and moved it into the kitchen in fear of my waters breaking all over it. The midwives had both got either side of me and had the shower curtain over there laps, as the man reminded me a couple of days later – I had one of the midwives wiggling away as I kept moving my bottom near her.

My waters breaking is one of the most vivid things I can remember from that morning. They went with just a loud pop and then it was like a waterfall, I was still on all fours so looking down I could see it, and I knew what I had seen before anyone even had to say anything. It had meconium in it; he had pooed inside of me. My first thoughts in my head were of oh no, they’re going to transfer me to hospital. Thankfully the midwives agreed that as I was very close to the end, this wasn’t needed and that after checking out baby’s stats, he was ok. My main midwife did say though that is my waters had broken at the beginning I would have been shipped into the hospital.

Things were pretty much a blur from here, I was getting tired and it had only been a few hours – really don’t know how people cope with anything longer. The midwives and the man cleared up my waters and put the spare shower curtain down. I remember at this point just collapsing to the ground, I didn’t want to be on all fours. I just wanted to lie down and curl up into a ball. I did the whole screaming for a epidural (like I did just before Oli was born!) and cursing myself for not being in hospital where I could get one of these. The midwives made me go back on all fours as baby didn’t like me being on my back. Think around this point I was just constant on the gas & air and had started to chuck in a couple of screams.

Before the screams and the pain had totally and utterly kicked in and before the waters had broken, Oli had woken. We heard his little footsteps in his room, thankfully Oli doesn’t ever come out of his room until he’s called or we go into him. Which we’ve always liked and proved to be handy this very morning. The man already put someone on standby and thankfully they were only 5 minutes by car around the corner, so he gave them a shout to come and collect Oli. The man got him all dressed and ready in his room and then bought him down the stairs. He really didn’t seem phased by the fact mummy was on all fours with two women around her. Was waving goodbyes and almost out the door and I shouted out for a kiss, quick run in for a kiss and then he was back out the door.

Next memory after all of this is of me just losing energy and having the midwives and the man try and get me sitting with my back against the sofa as the urged to push had come and that I was ready to do this. I do wish I had filmed this as I had wanted to originally but there was just no thinking about doing this, I even said to the man how that if we didn’t get round to getting the camera out that I wanted a mirror at the other end so I could see. Again no thinking about this at the time, I guess you just get so caught up with what’s going on that anything you planned is put aside. Guess another reason why I didn’t have a birth plan; I did want to go with the flow as you really can’t predict what happens.

Both the midwives had me with knees bent, 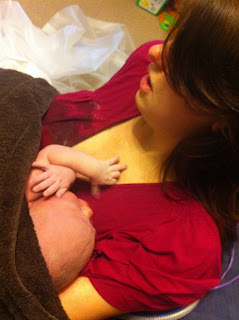 all ready in the labour position. The man was sat on the sofa behind me but as he told me afterwards he sat in the most perfect place to see everything that was going on. I could also see everything from where I was, I certainly remember seeing that head that just popped out on the first push. Then I remember hearing the one midwife shout at me, which made me listen to pant as to not tear myself. Of course upon hearing this I panted like crazy as to avoid any tearing. Thankfully this worked. They said on the next push he would be out, you just don’t want to do it though after already going through it and doing that initial push. The thought of it almost being over does give you that extra oomph though to go ahead and push. Dylan was born at 7.20am weighing 7lb 13oz.

If only the next several days were as straightforward as my labour, an hour after Dylan was born, we were taken to the hospital. Details of this will be in my next blog post.