We had double celebrations last month with 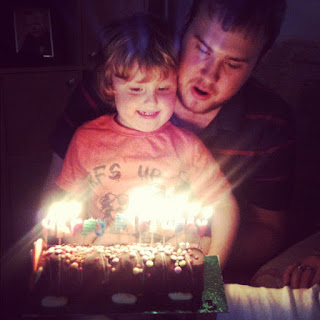 two birthdays; the toddler decided to grow up on me and turn three while the next day the man decided to have a birthday too. Thankfully this one decided not to give me 3 in a row by coming the next day. What I remember about these few days celebrating those birthdays was lots of cake, lots and lots of cake. It turns out that having birthdays so close together has its advantages. We kicked off the birthday celebrations with a birthday buffet at the in-laws; this please this pregnant woman lots. If only every day you could eat birthday buffets. Oli and the Man had a joint caterpillar cake which was rather sweet; I remember the man joking just the day before that he wanted a caterpillar cake. 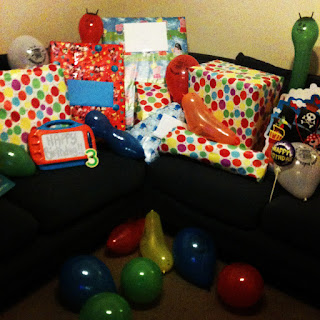 Daddy put all his presents on the sofa for him to come down too and blew up lots of funny looking balloons to place around them. He was so excited about this and see as we had left it to silly o’clock the night before to wrap his presents I just left him to it. Was worth it though in the morning when we were greeted with WOW. WOW.WOW. Most of his presents from the family and a couple of us were outdoor toys, shame that it’s rained pretty much every day since his birthday, so we’ll have to wait until we get some playtime with these.

Though to be fair I think his favourite present from 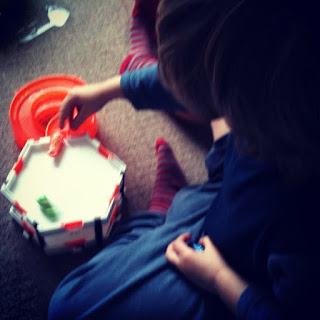 us was the little hexbug stadium thingy that we got him for his little bugs. He spent pretty much of the day playing with that, and it’s been played with often ever since, brownie points for us. We went to Frankie & Benny’s that evening where we had more cake.

The man’s birthday the next day involved, even more, cake, and his presents consisted pretty much of chocolate and clothes. Not like he got to see, let alone eat any of that chocolate with Oli and me around. It was nice to spend these days not thinking about pregnancy stuff and just celebrate these birthdays as a family of 3 for the last time.