This is what I last heard on both my consultant 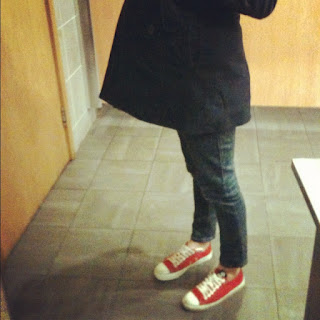 appointment and my last two midwife appointments; he’s in position to come at any time. They say it so calmly like hearing that isn’t going to be putting me on edge. Though they didn’t really need to tell me as I can quite obviously feel a head ‘down below’ and the pressure it is putting on my body is crazy. He’s so low down and has completely changed the position that all my maternity clothes don’t quite fit as they used to anymore, would you believe those jeans I’m wearing in that photo used to be normal jeans, and now they’re super skinny jeans. Baby really wasn’t thinking about my wardrobe when he decided to drop. 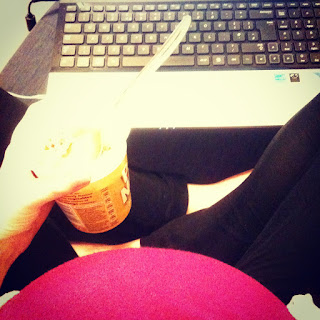 Woke up this morning with sore hips, woke the man up tell him who’s reaction was ‘OOoo’ in excitement. That’s not I wanted to hear; I wanted sympathy. For him every time I make some kind of noise or odd movement, he then thinks some thing’s happening. Guess he’s getting himself more into position and at the ready. I have just over a week until my due date; I really don’t want to go into that ‘overdue’ stage but then at the same time I know it’s nice to have that extra time without seeing to the demands of a baby. I’m wanting the baby to make an appearance early as much as I’m wanting him to stay cooking for a while longer. This being pregnant and achy, has been a fabulous excuse not to do much other then become best friends with my sofa.

So all we’re waiting on is those contractions to start to kick things off, though my plug or my waters are welcome to go at any time too. Though I feel like my body is going to give me similar labour to Oli’s where I was just hit by the contractions one morning. It’s only now years later that I realise I did have the dream labour with Oli. Waking up with contractions, hospital by half 10, waters getting broke at midday and baby born at half 3. Gosh, I even hate myself for how smooth that went. So if this one could give me a similar experience, it would be much appreciated.