Even though it is expected at the same time it is unexpected. If that makes sense? You just do not know when things will kick off, I swear the man at Pizza Hut today thought I was going to pop any moment during lunch and I’m pretty sure that’s why he was freaking out when we got stuck in traffic. I’m still staying patient, I’m not fretting and moaning (much) about the lack of baby though it would be nice to be posting cute newborn photos instead of bump photos. 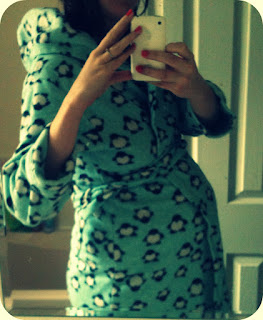 This post could of easily of been titled calm before the storm/back labour but funnily enough I’ve already used those as tittles this week for blog posts. After my night before last when my back was just in total agony, I phoned up one of the on duty midwives just to chat to her about what I was feeling. She decided that she wanted to pop out and see me and just do a quick check over. She wasn’t too happy when I said that babies movements have not been as regular as usual but then she also thought I had a UTI (wee infection) as she found a small trace of blood and some protein. Mine and the man’s reaction was both the same, just typical that yet again something else would crop up. She sent me packing to the hospital to just get double checked over. 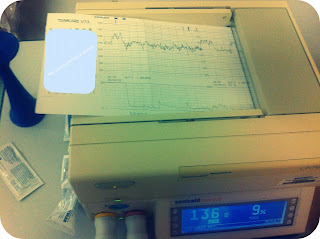 Queue dropping the boy off at the in laws and grabbing some food quickly as we know what waiting at the hospital is like. I really didn’t think I would be seeing the place again after I had to go and have the heart pack. They repeated a wee sample and found nothing, they said that the pain was most likely down to the start of labour thanks to babies position. I wish they could make there mind up, though yay to not having another UTI. I was put on monitors for baby’s movements, by the time I had got to the hospital I had felt a few movements. I still wasn’t overly impressed with them but I can feel that he’s dropped even more (which I didn’t think would be possible!) which probably explains why they’ve slowed down. I had to click down on a button every time I felt him move which I did, helped along with some cold water. So all normal, was given permission by them to take stronger pain killers for the back ache and told not to be afraid to stick the tens machine on to the lowest position if I feel like I need it. With regards to the calm before the storm, today really has been a calm day. I woke up not really feeling anything, back pain had settled to a numb ache and I wasn’t walking quite like a penguin anymore. Been able to spend a lovely day with my boys, stuffing my face with a all you can eat – they seriously got edgy every time I got up to refill my plate (I consider this a achievement) and as I pointed out to the man, I am eating for both me and a 6/7lb baby! This evening me and Oli went out on his scooter for a trek to the park, came home and I still have this wild burst of energy. I could quite easily go for a run if any of running clothes actually fit and if I had the right balance to be able to run. Think instead I’ll waste this energy on the birthing ball and try and give baby a helping hand.