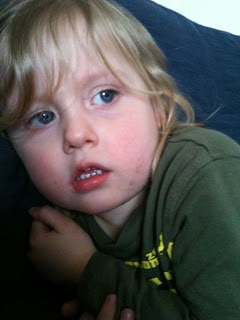 I knew I shouldn’t have done it, but I guess it’s just one of those bad mummy moments that you just have to commit at least once in your life with one of your children. Sadly Oli was on the other side of this mistake, well I say Oli I mean his poor blonde locks. I’ve blogged before about how he wasn’t comfortable about going to the hairdressers, and we didn’t want to push him so I have just left him to it. 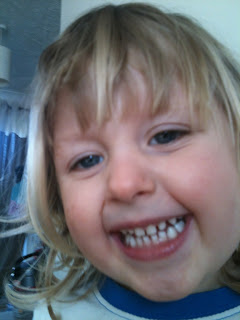 It’s been growing ok, getting longer but on days that long blonde hair can look so gorgeous on him but other days it was getting unmanageable. Am, to be honest, I was getting annoyed with strangers thinking that he was a girl at times.

Sunday morning I was walking past him with the scissors and joked that I was going to snip, snip his hair. He found this quite funny and sat down for me to snip his hair. I just couldn’t resist, I got the scissors, and I took away the long hair at the front. As soon as I did it I was horrified with myself; he looked more like a girl then he did before!! He had this blonde fringe surrounded by blonde hair. I couldn’t leave him like that, especially with pre-school the next day. 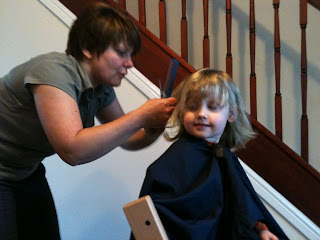 In desperation, I turned to Facebook in the hint of a mobile hairdresser to come and sort out his hair. Thankfully I found someone who was free to come and do it later that evening.

This was when shock kicked in again when my usually fidgety toddler happily sat on his Tripp Trapp to let the hairdresser sort out his hair and give him a much-needed haircut at the same time. He actually just sat and watched TV and happily chatted to the 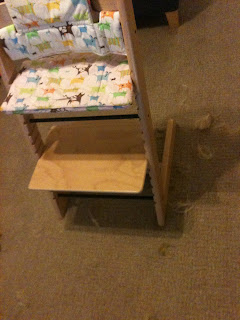 hairdresser, she was lovey, and I’m going to make her Oli’s regular hairdressers. She made him feel so confident, teaching him to blow his hair from his/her hands and explaining & showing him the equipment that she was using. He even let her put a gown on him.

Guess it just shows again how much he’s growing up, he’s bordering that older child stage, and I know it won’t be long before we’re saying 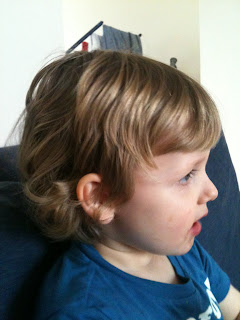 goodbye to the toddler years. Have to admit there were tears from me when it came to clearing up his hair, it was all blonde, and we already spied that his roots had started to go dark so now we’re left with a boy with dark blonde hair. He does look grown up and so very different. It will be much better now that the weather is warming up to keep him cool and for it to dry off quickly when it comes to getting the pool out. Just remind me with the next boy to get him used to the hairdressers as soon as possible and not to leave it so long in between snips. This was Oli’s third haircut, guess it’s a haircut for each year that he’s been around.