A few weeks ago we were invited by Playmobil to attend the Toy Fair to see the fantastic new ranges from Playmobil for 2012. Playmobil had a rather impressive stand which housed lots of the new sets for us to see (and play with) for ourselves. This year they are launching over 128 new products, more than ever before. We’ve been fans of Playmobil ever since they got in contact with us last year asking if we would like to review the Playmobil Take Along Noah’s Ark from Playmobil’s 1.2.3 range. This range is aimed at children around Oli’s age and introduces them to the whole concept of Playmobil. So of course with another one on the way we were intrigued to see what was new from the Playmobil 1.2.3 range this year. 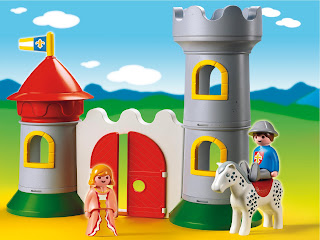 that was until I looked closer and actually observed both Oli playing with the range and had a look at it myself. There’s so much more to them then meets the eye like this First 1.2.3 Knight’s Castle, the castle tower can be stacked on top of one another, and it comes with both the knight, princess and horse. Could make a great first castle set for a little one.

One of our favourites from the new range is the Airport Shuttle Bus. I love the fact on both sides of the bus it gives you little shapes in the form of luggage that fits into its own little slot, hence helping little ones to sort shapes at the same time as playing. It comes with all those little figures and accessories and for such a fantastic price. Both of these products are due to be launched in March. 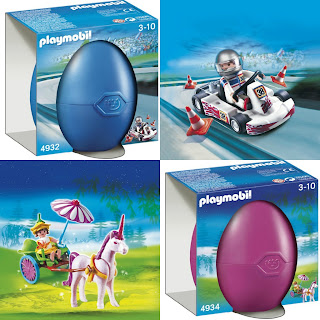 Launched this month in time for Easter is the Playmobil Easter Eggs. Ideal alternatives to chocolate for your little ones. Though you could always do what I plan on doing and get one of these to go alongside the gift of an Easter Egg so that when the egg is all gone, they still have something to play with. Priced at around the same cost of a chocolate egg, these don’t go breaking the bank, and you are left with something to show for your money. Our nephew will be getting one of these instead of an egg from us. 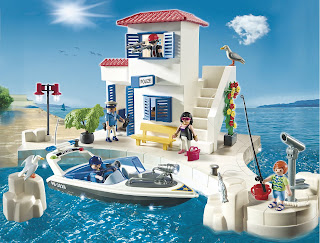 released this month was the Playmobil Harbour Set, I think this was one of my favourite sets from the tour. This Harbour Police Station with Speedboat is such a cute little set where I’ve not seen anything like it before. The speedboat floats which means you can double it up as a bath toy, it can even be upgraded with the Underwater Motor.

The Car Ferry With Pier also floats and can be upgraded with the underwater motor. Like most Playmobil sets it’s flexible enough to go with all the other sets available, the landing pier can be attached to the harbour dock from the Harbour Police Station that I’ve just mentioned. It has little wheel blocks on board for the vehicles and even has a bicycle rack. 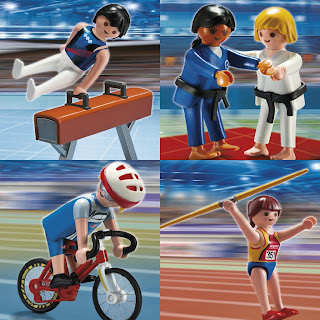 there’s a major event going on this year in the UK, and we all know what that is, these special Playmobil high-performance athletes are here to compete at them. 15 playsets available from June come with accessories all at pocket money prices. In the picture is Gymnast on Pommel Horse, Judo Competitors, Cyclist and the Javelin Thrower. My favourite is the Gymnast on the Parallel Bars, what’s yours? 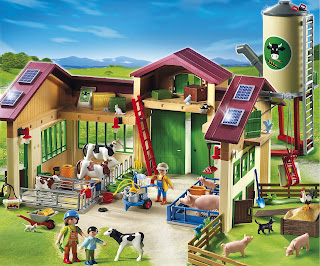 Lots to do at the Playmobil Farm especially with all the sets available this year. I’m rather fond of this Barn With Silo, particularly the silo which can be filled and emptied. Really can stretch a child’s imagination with this set, why not team it with the Large Tractor with Trailer which fits through the gate. It comes with a cowshed, pig sty and so many more accessories including a milking machine.

different is the Playmobil Pirates set. This set here to the left, the Pirate Adventure Island is rather impressive. A child really could hours of fun with this; It includes a fire code puzzle with five difficulty levels. You place t 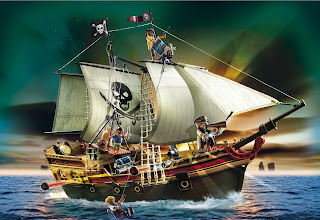 he coins in the same order as the fire sequence to open the cave and to acquire the treasure. Has an adjustable bamboo maze, falling rock and secret hiding places making the hunt for coins more difficult. The Large Pirate Ship also floats and has two cannons and a removable upper deck. Comes with a joker coin which can be used in the Pirate Adventure Island. Both sets will be launched in May. 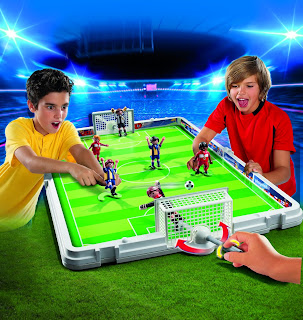 For your footie, mad child why not get them this football stadium in a folding suitcase, handy if they wanted to take it to a friends house or away to the grandparents for the weekend. It comes with four soccer players and two goalies, but you have the rather cool option of buying players in your team colours. You can even get Referees and Field Medics with Player. The Take Along Soccer Match will be available in April.