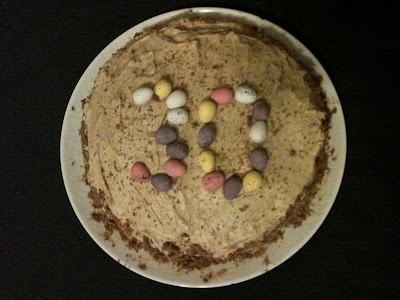 Like… FINALLY! I’m into my last ten weeks of pregnancy, that last quarter.

I’ve been waiting for this number to crop up for a long time now. It hasn’t been easy sailing this pregnancy, though anyone is reading my blog/twitter stream already knows that. I wanted my blog to become part pregnancy diary on top of my usual toddler related posts; it hasn’t exactly gone that way. Just like each week I had planned on taking a picture of my bump each week, that hasn’t really gone to plan either. I’m a little sad that looking back through my pregnancy posts that it seems to be nothing but the negative stuff.

I’ve made both myself and baby a promise, that the next ten weeks will be filled with nothing but positive pregnancy posts. I can’t promise that I won’t stop moaning about the way I’m feeling, but despite the way I’ve been feeling in this pregnancy, the baby has been nothing but healthy. I went to the doctor yesterday like I said and had a lovely little talk with her about what was going on, she could see from her notes that I had been admitted to hospital last week and was now under the obstetric consultant. We talked about the breathlessness, and she explained how that it can just happen with pregnant women, I already knew this and I really did feel pathetic that I was experiencing this and struggling to keep it under control. I’ve been given something to treat anxiety when I feel myself being breathless and struggling. I’m still confused about how I can be feeling like this when I’m taking it so easy and not stressing about anything.

See I’m already gone off track and started moaning, I should talk about hitting this 30-week mark. Last night baby had hiccups for the first time; I was only wondering the other day if I would feel this at all and was trying to remember what it felt like. I’m pretty sure if you would of putting an ear to my belly you would have heard his hiccups so very clearly. It was very cute and put a smile on my face after a rubbish day. My bump is coming along despite the concerns about its growth, I’m living in mainly the man’s t-shirts and old joggers and only really dressing in maternity gear when I need to leave the house. Exercise has been stopped in any form, so am hoping that in the next few weeks I can go swimming again. We’ve started to talk about names, but don’t seem to be getting anywhere with them. It seems that we just can’t agree on a name that we both like, so looks like this will be our challenge over the next ten weeks.

Hope you like the cake the man baked me to celebrate hitting the 30 mark, it really does taste as good as it looks!