So I’ve been doing a lot some moaning lately about this horrid sickness and the way I’ve been feeling. It’s been hard for me to think about the nice things to pregnancy, especially the whole having a bump again. With Oli, it was only in the last couple of months that I looked like a pregnant woman. I felt strange about pregnancy and the whole having a bump last time so didn’t take any photos of it, it was only after I had given birth where I’ve spent the last two years mourning my bump and getting bump envy every time I saw one out and about. This time from the moment I’ve found out I’ve made it my mission to take a photo each week so that I can keep a photo diary of just how much my bump changes over time. Here are some photos of it from the last few weeks. 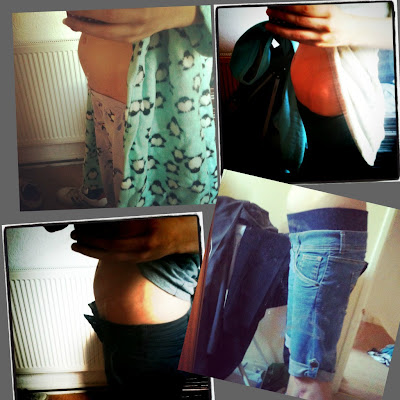 This time around I’ve started showing a lot-lot sooner then I did with Oli, I’ve also noticed it’s in a completely different place to the first bump too. He was much higher up which was handy when it came to avoiding to buy maternity clothes; I actually stayed in normal clothes for the whole nine months of pregnancy. This bump is very low down, and from the moment I practically became pregnant I’ve not been able to fit into any of my ordinary trousers and tops are a struggle too seeing as most of them with tightly fitted tees! So it’s been joggers and baggy hoodies for me the last several weeks. I do fear I may have to go winter shopping in maternity shops in the next few weeks.

I have my 12-week scan on Monday; if mine and the midwives calculations are right, then it should say I’m 13+1 weeks. I’m hoping I’m in luck and I’m further on, I may cry if they give me anything less then 12. Just itching to get these first 15/16 weeks out of the way and get down to enjoying this pregnancy as I should be.