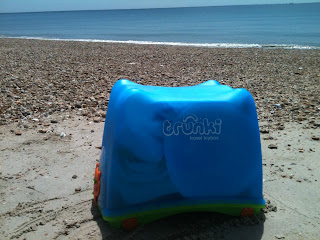 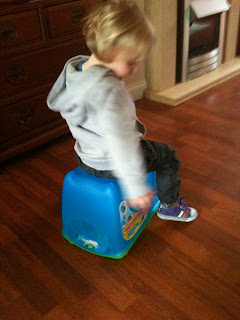 Ever since I first heard of trunki back when Oli was a newborn, I always planned on getting him one, by one I mean the ultimate trunki – the ride on/pull along suitcase. I’ve just been waiting for when the time was right and for him to be at the right age to really appreciate the coolness of it. Seriously, a ride on suitcase? I think they need to tap into the adult market with those. We didn’t know about the trunki toybox until we were asked if we would like to try one out.

The moment it arrived the toddler knew what to do, it has wheels and he knows that anything with wheels can be pushed along. He soon realised by sticking himself on it that it was a ride on toy. I didn’t get to test out the toybox function to it until he had gone to bed, he was horrified at the very thought of turning it over and taking off this lid of wheels. 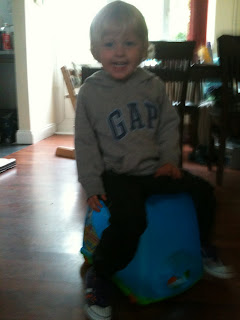 He soon got used to the idea of using it to store his toys when he wasn’t playing them, especially when he realised he could transport his toys from one house to another and have his new ride on toy at the same time to play with.

The toybox has more than enough room for all of his Duplo which he’s taking everywhere with him at the moment as well as some of his cars, trains, planes and a few storybooks. When he went away last weekend, we put it at the bottom of Oli’s feet in the foot well as it suggests, fitted well and meant using space that we wouldn’t usually use leaving us more room for our stuff. 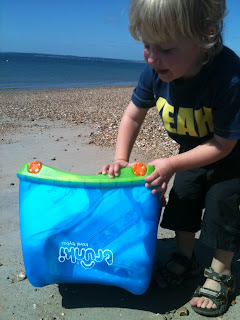 Not only has Oli been using but we’ve been using it too, we often visit the beach on sunny days and take a picnic with us. I much prefer to using it to bags as thanks to the carry handle we can stick our drinks and food in it and keep them the right way up.

If you have more than one trunki toybox not only they, do easily stack on one another, but you can use the rubber tongue attached to it to create a ToyBox train. 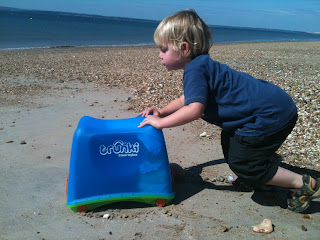 We all very much like the Trunki ToyBox and do consider it a useful and playful box to own. Cannot wait to get Oli his very own Trunki suitcase for when we go on holiday next year.