The first thing I loved about Noah’s Ark was, of course, the bright colours and how stable and sturdy the toy was a plastic toy. You can tell straight away that it will last for many years and can withstand the roughest of toddler play. First thing from Oli to be noticed was the many animals that came with it, along with some a little sack and 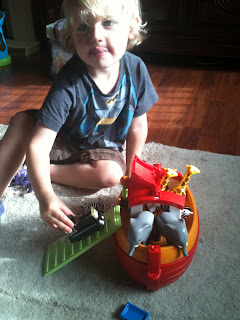 a bridge for the animals to get in the ark. These were a good little size and shaped for his little toddler hands.

Because of how sturdy and child-friendly it is, it’s suitable from the age of 18months onwards, and as your child gets older, you can show them the features like the top half coming up which you can store the animals in or use that extra level to play with as Oli does. It has a latched roof which my toddler has used to poke the giraffe heads through, something I wouldn’t have thought of.

A big plus to the Noah’ Ark is that it doubles up as a bath toy, it floats! 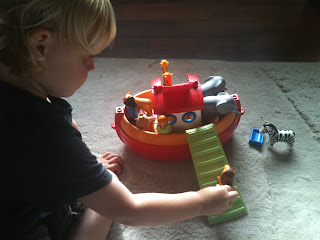 The carry handle was a hit too with us; it made taking it away this weekend much easier. Much much fun was had with this toy, we think it would make the perfect first Noah’s ark for any child.