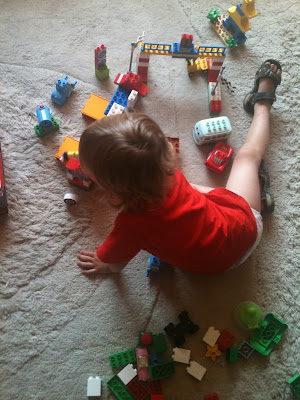 As LEGO Duplo ambassadors we occasionally get sent some Duplo to play with. As you can understand this is no problem at all for Oli, who has a dedicated table for his stash of LEGO Duplo. Unexpectedly we got a delivery the other day of Cars LEGO Duplo; I do not know who was more excited for Oli – me or the postman who had caught a glimpse of what it was.

He’s a BIG fan of cars like most toddler boys his age so teaming up Duplo with Cars was a fantastic idea. We got sent 4 of the sets from the LEGO DUPLO Brand Cars which I’ll tell you a little about.

The first one we played with was Agent Mater which is one of the smallest sets but seems to be one of Oli’s favourites. He shoots little cannon missiles which we have taught Oli to aim at the Lego Duplo bricks which have targets on them. It’s great that Mater is the perfect size for Oli’s toddler hands 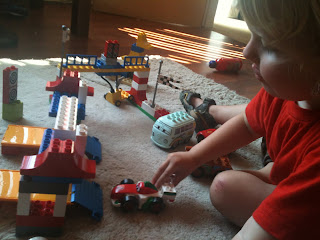 The second set was Luigi’s Italian Place which was just as exciting as it contained two of the cars – Luigi and Guido. We mixed and mashed the place up using the pictures on the box to make various scenes. This is the kind of set which is a great add to the next two I’m going to talk about or even played with on it’s on.

Next, we built Tokyo Racing which comes with a Lightning McQueen and Carla Veloso. Once built we had to explain to Oli that sticking the cars at the starting line and shouting ‘GO’ at them wouldn’t make them move! Bless him. Though I’m pretty sure he had more fun racing them around the floor himself.

The last set which wowed him just like the others was The Pit Stop which came with four Cars – Lightning McQueen, Guido, Francesco and an exclusive Fillmore. This is where we taught Oli all 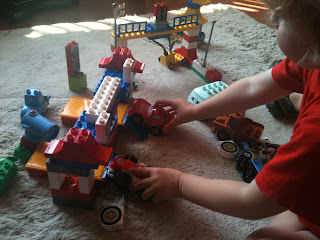 about giving cars a ‘rest’ and how they needed petrol from the little fuel pump which was also a great size for his little hands. The garage doors are a fab idea as not only does he use them to shut the garage doors but he likes to push the cars up, and down them, can’t see him getting bored of doing that anytime soon.

The sets all merge really well which is fantastic if you are buying the odd set here and there over a period for your little one.