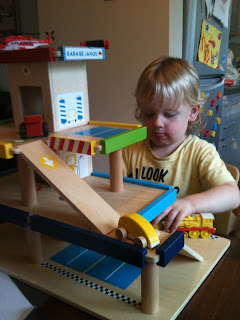 The guys over at Wooden Toy Shop.co.uk got in contact with us to see if Oli wanted to review something from the fantastic range of wooden toys available on their website. It was so hard to decide what we wanted; we had been toying with the idea of getting a wooden shopping cart like the one he had got for Christmas broke a few weeks. Lately, this was done to it being made out of shoddy plastic no question about it. We liked the BigJigs Shopping Trolley which at twice the price of the plastic shopping trolley we saw as a good investment if we had gone back and bought a replacement plastic trolley that would have been the price of the wooden one right there spent. Might as well cut out the tears from the broken plastic one, the effort of going out and buying it and just buy the one which will last way longer than the plastic one. See I’m learning, another learning learnt in this parenthood lark. 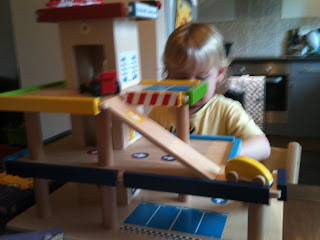 We thought the cart could wait, after browsing the playsets & vehicles we fell in love with the wooden play garages. Oli is REALLY into his cars at the moment so took this chance to get him his first toy garage. We chose the Janod Toy Garage which arrived a few days later much to the excitement of one two years old.

Like most toys of this size, it came in pieces, along with the instruction guide we quite easily managed to assemble it just under 10minutes. Which is always good when you have an eager toddler ripping your arm off trying to get to it to play with it. What was a bonus to this garage is that it comes with extra play pieces, as well as some wooden cars you get a little play gas pump and a helicopter, helping you to get more for your money. 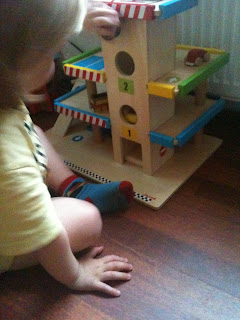 From the moment it was put together to even now where Thomas The Tank Engine has found a new home on it, , hehe’s been playing with it on a daily basis. It is just one of those essential toys for little boys who are into playing with cars. The lift is a genius ; he has much fun transporting his cars from level to level. When it was set up, we had fun putting the stickers on the garage ourselves with where we wanted to put them.
It’s sturdy and as Oli found it out before getting a telling off, able to take his weight. Even though it’s wooden, it’s still quite light which is handy, and it’s been played with all over the house, from the dining table to the floor.

The Janod Toy Garage was priced at £54.95 which after watching the toddler play with it for the last couple of months, we deem to be good value for money. From first looks, we knew it was going to be something which lasted for years and will last for all of our future children and possibly even their children.