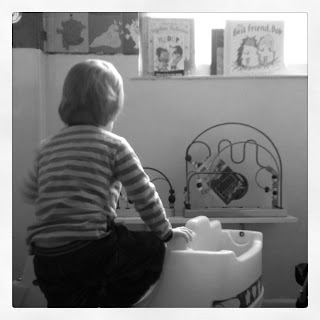 We had our first trip to A & E today with Oli, he had fallen over into the hard bit of the sofa under the cushion and had managed to split his gum open. So not only did he has his first hospital trip but it was the first time I’ve seen blood come from my baby boy. I know come 4/5 years time, I’m going to be the queen of the first aid box and come armed with plasters but to see him bleed at this age was a little upsetting.

He was in shock himself; he spent the whole car journey to the hospital saying ‘oh no’ while clutching his blankie tightly. When we arrived the receptionist told us that we would have a hours wait, great.. an hour wrestling a tired baby and trying to keep him in the playroom which really could have done with a stair gate to stop me from being a human stair gate.

It was so upsetting when we were called in, and I had to hold Oli tightly so that the Doctor could look into his mouth; he was sobbing which of course set me off. This motherhood really plays havoc with your emotions. We were told his teeth were all fine, but it will take a while to heal, and then he was to avoid anything salty which we do anyway, and that crisp might not be a good idea either. Pretty sure if he was able to understand that Oli would have been saying ‘oh no’ again.

We spent the rest of the day trying to stop him from knocking it which of course any parent to a toddler knows it impossible, bath time was like a scene out of a Dracula movie. He’s tucked up in bed now bless him. I’m now sat hoping that today was the first and last time we visit A & E but something tells me we’re just getting started.