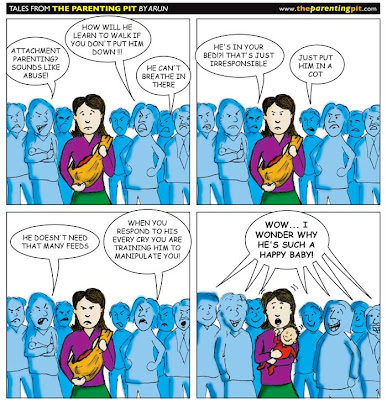 When Emma asked me to share with you why I try to be a natural parent and how I came to it I had to smile. It’s something I’ve asked myself a number of times and have even wanted to write about on my own blog, but have never really been able to find the words. So I guess the best place to start is at the beginning.

I didn’t know anything about babies before I had mine. Yes, I attended antenatal classes, but they were as useful to the practicality of having a baby as sitting in a driving theory is to getting behind the wheel – you have to do it to know how to do it.

During my pregnancy I was very ill. I had Hyperemesis Gravidarum and my doctor didn’t know what it was or how to treat it. In fact my mother diagnosed me over the phone from Australia and my doctor had to look it up in a book. After he ignored it and I ended up in hospital, I began researching the condition. This led me to researching childbirth in general and I fell in love with the idea of a home birth, which opened up a whole new world to me.

I began reading about ‘Attachment Parenting‘ and the more I read the more it made sense to me. But, I refer you to the theory and practice argument. Liking it and implementing it are two different things.

When my daughter was born in a beautiful home water birth, we started off as the average first time parents, but within days she dictated a change in our behaviour:

And so the list goes on. I kind of feel that Kyra chose natural, attachment parenting and we just had to follow where she led. I am grateful for it though. People say a happy mummy equals a happy baby, but I don’t agree. I think a happy baby is much more likely to make a happy mummy.

Attachment parenting doesn’t have to come with flowing skirts and flower power, but the moment we stop trying to train our babies and start listening to them http://www.diaryofafirstchild.com/2010/08/03/whose-baby-is-it-anyway/, parenting becomes easier.

And let’s face it – at the best of times , parenting can be hard, so why not do what we can?