Are something I had never heard of before this time a week ago before the Toddler threw one at me that evening. It was last Thursday when after he had finished pre-school we had stopped off at a friends house for a coffee and for the boys to play, he didn’t look too perky then and it looked like he was coming down with something. When we got home, he just wanted to chill on the sofa and watch a film, which is the norm for him if he’s had a busy day at pre-school. I assumed he was just ill and he had an early night. Anyone who read my previous post about the baby being ill or seen any of my tweets know that the bug hasn’t left us alone this year.

I heard some noise from his room, and it was like sleep talk but the kind of talk you would hear from a crazy person, ramblings due to a fever. As soon as I got close up to him, he started to have a fit. It was the scariest thing I could watch my son do, his eyes were rolling around, and he was shaking. I then tried to wake him when he stopped, but he wouldn’t wake and then was drowsy, so instantly I phoned 999. Dialling those numbers is just a weird sensation in itself, I told them what was going on with him, and they sent someone straight along.

Who upon taking the Toddler’s temp & seeing him, called for a bigger ambulance to come and take him to hospital. I did feel like a child myself, a little loss and not quite knowing what to do. It is one of those situations that you rarely find yourself in and not ever imagine yourself in. I didn’t bother to call the Man because he was finishing work at the same time as me calling 999 so he would have been driving. I did feel for him as he approached the house to find ambulances parked up outside our house, not what you expect to find. Our lovely neighbour from across the road had come in and was with the Toddler as I packed a bag and gathered stuff together. He’s Daddy to the local neighbourhood cat Molly which the Toddler adored and was pleased to have Molly’s Daddy with him and tell him how he didn’t feel very well. He & his wife stayed with the baby as I went in the ambulance with the toddler while the Man followed in our car behind. 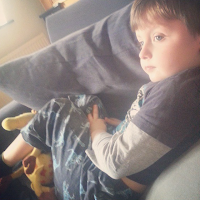 He had had a febrile convulsion because his temperature was so high. He was ill for the next couple of days after having it and he just constantly had a temp which we did and was told to keep on top of with regular doses of calprofen. According to the NHS, the cause is unknown but is linked to the start of a fever with a high temperature of 38ºC or above. It also says that an estimated 1 in 20 children will have at least one febrile convulsion at some point. It goes on to state that most of them occur between 6 months and three years. I guess the Toddler wanted to get one in while he still fits in that criteria, seeing as he turns four next week.