It’s just not fair; it’s going around and going around. Bouncing from one family member to another. I’m starting to think that the Man’s joke suggestion of locking everyone in their rooms until 100% better, maybe the way forward. We’ve all had it, and I know it’s doing the rounds at the moment, all I see is Facebook statuses and tweets declaring ill family members and how nights have been spent next to bedsides with the sick bucket in hand.

We’ve actually had to chuck various bit of the toddler’s bedding which just could not be rescued. That and I wasn’t strong enough to cope with the smell or sight of them. I was also stupid enough to not think about putting any kind of mattress protectors or the Toddler’s bed or on the Baby’s Sleepi. We do have these on the way through, so if my children would refrain from being sick right now – it would be greatly appreciated.

Sleep is a no go at the moment, it’s always one of the boys up or needing cuddles and settling back down. They just don’t understand how we would happily take away these germs and take them on ourselves if we could. Thankfully the man’s working hours are flexible enough for him to be around during the day so that we could team up and also take it in turn to nap. I was told to stay in bed this morning, but I just couldn’t sleep, not with the heartbreaking cry coming from the Baby.

It seems that he’s come down with it worse then what any of us have done, yesterday morning in the early hours until the actual morning was horrendous. Never have we seen so much sick from such a little person, along with a crazy temp we were prompted to phone NHS direct who did suggest A&E, but we didn’t want to go that far with a poorly baby, especially one who was being sick. Thankfully got an appointment with the doctor whose advice was the same one as we saw today when he still wasn’t well enough. Paracetamol, simple as. To bring down the temp. I’m hoping along with that and plenty of cuddles from his Mummy, Daddy & big brother we can get him to back to his usual smiley self. 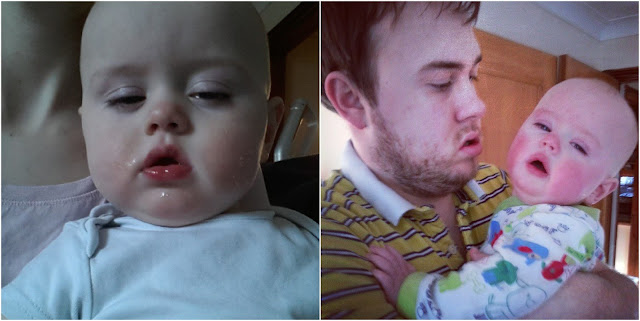