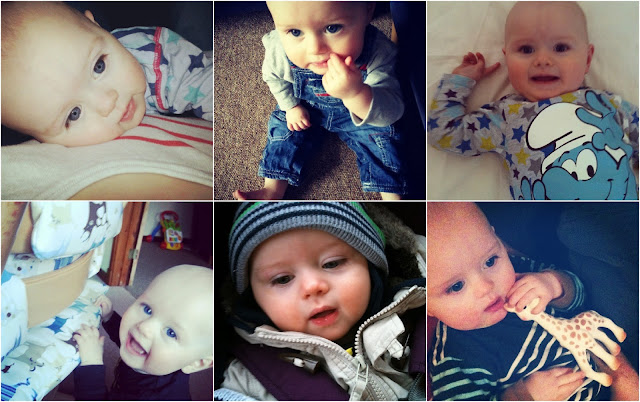 I didn’t quite realise or remember how quickly they can change in 1 month. Neither can I believe how quickly the last month has gone, I think it is starting to go quicker now, but then part of me thinks this could be to all that he is starting to do. He has crawled and cruising down to a T, and we’ve started taking bets on when he’ll take that first step.

His first tooth appeared this weekend, on the bottom in the middle which surprised me because I was expecting it to come through at the top in the corner because of the way he’s been shoving his fingers/anything he can get his hands right to the back of it. I guess those ones are the rather painful ones.

The cheekiness is really coming out to play and at the same time he’s starting to be taught about boundaries. I’m pretty sure he now understands what no means and when told so by his father, he really screams back at him but will stop. Major cute and something I need to try and catch on video. When I say no, I get said face and tear. I’m pretty sure he threw a full-on tantrum in my lap earlier.

His favourite things at the moment are some musical toy with a microphone attached which we got him for Christmas; sadly the batteries have gone, so it’s been making a weird sound, but I’m not sure if that’s what he likes about it so he may disown it once they’ve been replaced. He likes some toy which I got sent years ago for his brother to review when he was younger; it has some little gears which can place on top of one another. It’s such an enjoyment to watch him playing with these toys and getting fun out of them. 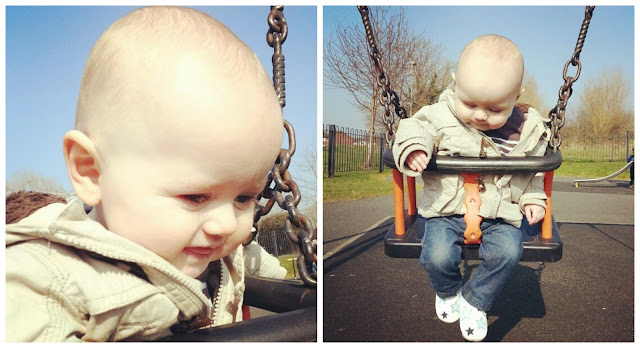 He’s been introduced to the park, and he’s a huge fan, his eyes light up just as much as his big brother’s when we enter those gates. I fear he may be a tiny daredevil; I get a mardy face if I’m not pushing enough and if I stop I get a stare as if to say ‘what are you doing woman? Push me!’

I know now the fun is starting to begin, his independence starts now. In only the space of a few weeks, he’s changed so much but I know the next couple of months as he approaches one, we’re going to see our baby grow into a little boy. This makes me sad, the baby days did feel like they were going to be around for a long time, but now they are on the verge of vanishing and being replaced with potential toddler material. I can’t wait to see what the next month is going to bring.