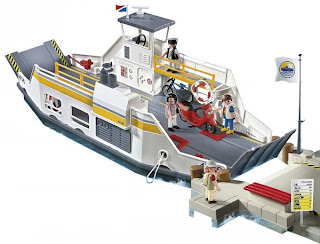 We’re HUGE fans of Playmobil in our house, and we already have lots of Playmobil surprises for the toddler wrapped up ready for Christmas Day. With Playmobil it made choosing Christmas presents for him rather easy, he’s in that whole Pirate/Transport/Castle loving stage. Perfect because Playmobil pretty much sells products for everything a small (or big) child could like. Transport wise I snapped up the Police Van as a Christmas present as well as a few of the related items.

Playmobil sent a rather excited toddler the Car Ferry With Pier to play and give a review of, he was very pleased, and I knew he had his eyes on it when we were checking out the Playmobil range for 2012 at the Toy Fair back in February.

I put it together which was simple enough following the instructions; it also guided you where to put the stickers which help to bring the boat to life. It’s sturdy and isn’t likely to come apart with general day to day play. You get plenty of value for your money with it being a larger toy, which just adds to the excitement.

There’s no doubt that Oli loves it, it’s a big boat with accessories! What’s not to like? He likes pretending to be the captain and bossing everyone around on the boat. It’s toys like this that help to exercise a child’s imagination. The detail to the boat is fantastic, right down to the little bike space and the ring you throw in the water. Since taking these photos, Oli has all his Playmobil vehicles to it to the board, all of which fit on perfectly. We may have also had a Dinosaur invasion which reminded me of scenes out of Jurassic Park.

Do you know what the best thing is about the ferry? It floats on the water!! Yes, you can use the ferry on water and to bring it to the life you can add a motor to it. We’ve not tested out this function yet as the toddler and baby share a bath but I think when it comes to the Summer, I’m sure he’ll be taking it into his outdoor paddling pool.

Would I of bought it myself for the boy? Yes! I think if we hadn’t been sent it to review it would of most likely of ended up as one of the Playmobil gifts we have got him.It’s one of those toys that could provide hours of play and endless fun with its many possibilities; I also love the fact that it can be added on to providing gift ideas for Birthdays and Christmas’s in the future.