Several months ago, back when I was pregnant with Dylan I was sent the Stokke Xplory from Stokke to put through its paces and review. Dylan is coming up six months this week, and we’ve been using it since day one so I actually now feel that we can give an honest account of our Stokke Xplory experience. The first thing I want to tell you is that this pram is perfect. Yes, you heard me, perfect. Six months of use and I just can’t find a flaw with it. Seriously I’ve tried to find a fault, but nothing. Not even the man who finds a flaw with everything (apparently mine is my lack of enthusiasm towards housework) could say anything negative about the Xplory. In fact, he’s just as much a fan of Stokke as me. 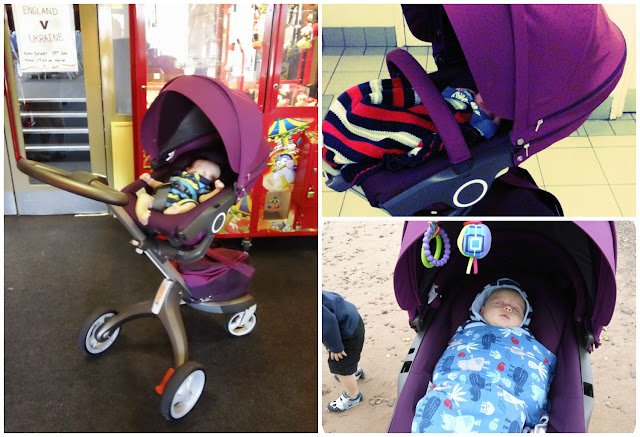 Setting up had me holding the chassis in one hand and instructions in the other while scratching my head, yeah how about that for multitasking. I have to admit it took me a while to figure out the ins & outs of it. It was the man who came along and taught me how to put it up and down. We had it all setup and mastered before Dylan came along, I even had the Xplory sussed before I had an actual hospital bag packed and ready. The Xplory collapses into three pieces – the seat unit, the chassis and the shopping bag. We can get it into the smallest of places, here’s a picture of it stored under our stairs while we waited for the arrival of Dylan, next to his baby set for the Tripp Trapp. The other pictures show it folded up and collapsed ready to go into the car and of it actually in our Volkswagon Golf boot. 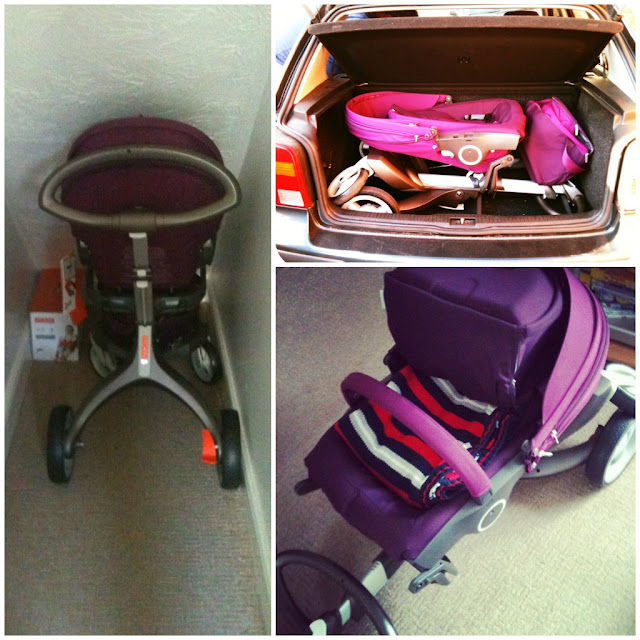 We’ve been using it since he was born just using the Xplory & Crusi seat on the Xplory chassis and we’ve not used the Carrycot but only because Dylan was born the moment Summer decided to make an appearance. I think if the weather were any cooler we would have bought the Carrycot attachment for it. The Xplory came with a removable insert which we’ve been using since the first day to accommodate him. This has allowed and encouraged him into the laying down position and to keep his back flat. It can easily be removed as Dylan gets bigger and needs more room. 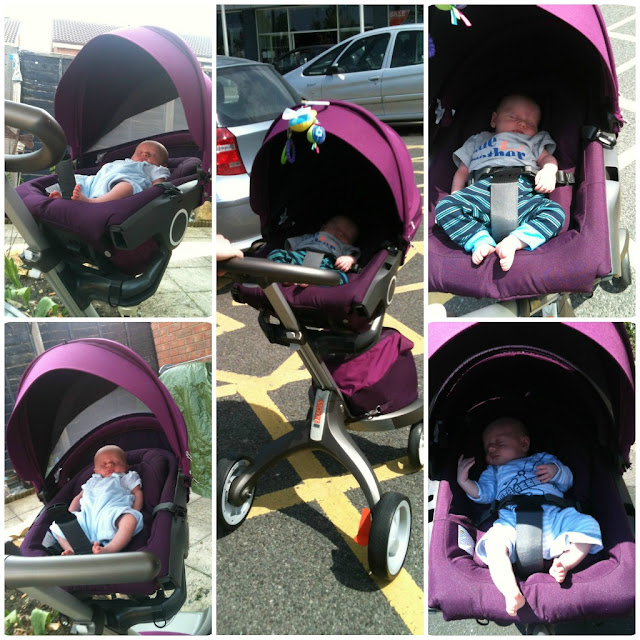 I’m a huge fan of the iconic Stokke hood, with its multi-functional uses. One of the issues I had with the last pram I used with Oli was with the hood, it was just a standard fold in, fold out, and it didn’t provide enough protection from the elements. It was like they had given up when it came to providing that pram with a hood. Well, Stokke, have it all sussed with the hood they’ve provided the Xplory seat. It has a folding visor which gives it that extra bit of shade or privacy even when your little one is asleep. The Xplory hood has an optional opening which provides ventilation and is protected by a mosquito net. We found this function rather handy come the warmer weather and we’re trying to cool baby down.

It goes everywhere with us, we’ve taken it to the zoo, the pram and even to the seaside. The Xplory can be both your town and city buggy; it has swivel wheels which make pushing it along a breeze. We’ve had no issues with wheels locking or any difficulty with simply pushing the pram in any direction. I’ve had experience of a three wheeler pram in the past, and I just couldn’t get along with that front wheel and how it wouldn’t allow me to go up easily and down the kerb. The wheels are a soft material so no risk of puncturing with no need to pump them.

This is where the design of the Stokke Xplory does shine, the wheels are spaced apart evenly enough to allow you plenty of foot room (or even to add a sibling board) so no risk of banging your shins. I say that as I have a lovely line of a scar from the toddler’s previous umbrella fold buggy which caught me as I was going up a kerb. The wheels don’t stick out even though they are spaced apart; I can easily get the Xplory down the middle aisle of trains without catching it and still allowing space either side of it. This also means that pushing it around shops is a breeze without it being a difficulty. The brake is based so your right foot can easily push it on/off when needed, locking both the wheels at the same time.

One of my favourite functions is the two wheel function which allows you to easily push/pull the Xplory on uneven surfaces such as a pebble beach. Here we are at Bognor Regis showing Dylan the sea and letting him experiencing the delights of the seaside from the comforts of his Stokke Xplory. 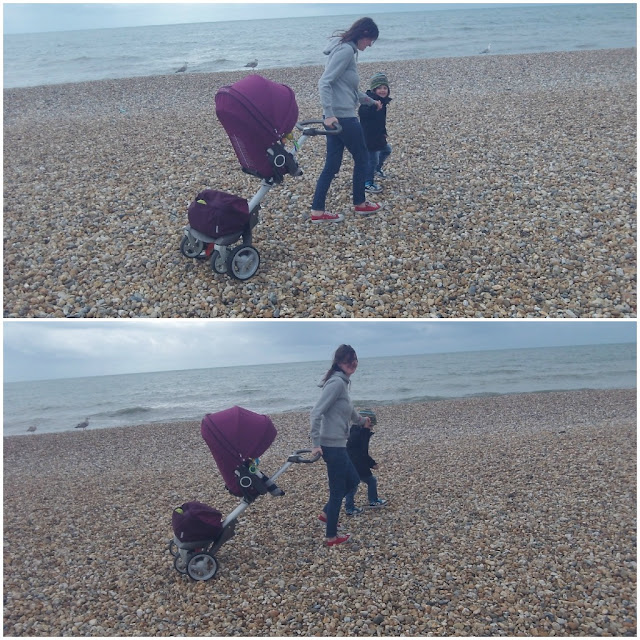 Accessories wise, the pram comes with a rain cover which has a handy opening if you needed to see to the child without having to take the whole cover off. So the Stokke Xplory comes with pretty much everything you need when it comes to baby’s needs. Of course, there’s always the extra accessories which make life easier/comfier/more fun. I must have accessory is the cup holder which is not only handy for carrying my cream frap’s but holds the toddler’s juice bottle so it’s always to hand and is at a level where he can reach it himself. I also found that it encouraged me to drink more water, which was especially handy in those first few months of breastfeeding/warm weather. 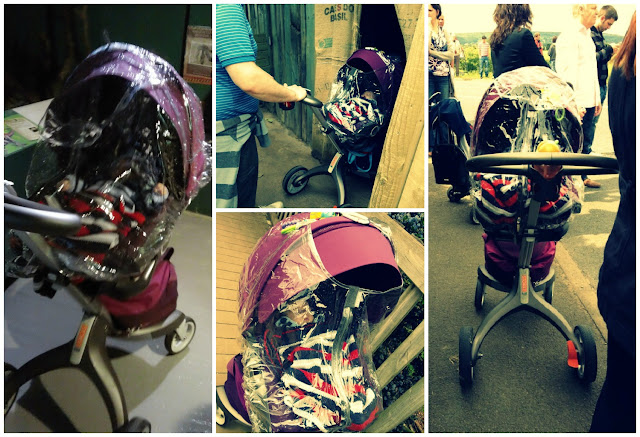 The adjustability and multi-use to this pram is pretty much why I sum the Stokke Xplory up as the perfect pram. The obvious reason being the height and it’s many positions, Dylan has not only faced us since day one, but he’s also been at our height. We don’t have to bend down to face him or see him, placing him in his Xplory at this level means he automatically gets the comfort of seeing our faces which provide him with the security and the knowing that we’re only a handlebar away from him. This handle bar is adjustable as well; you can adjust the height of it to fit the person pushing the Xplory as well as the angle of the actual handle bar itself.

We’ve tried out the pram in the mode where the child can be facing the world as he/she gets older. We went for a long walk one day, and we knew the toddler would most likely get tired, so we took our Stokke MyCarrier along with us in the shopping bag. When Oli got tired, we put Dylan in his carrier, and we easily turned the Xplory seat around with the release of two buttons. We removed the seat insert and popped that into the shopping bag, and Oli at the age of 3 climbed into the seat where he sat with comfort and with his feet resting on the adjustable footrest. Having it facing the other way with more weight pushing down on it, made no difference whatsoever with its ability to push along easily. I’m comforted by knowing that the Stokke Xplory will see us through from the newborn days until those toddler days.

I know not only by reading but by seeing it with my own eyes that safety is an important factor for Stokke when it’s come to Stokke products. The pram comes fitted with a 5 point harness which is adjustable to fit your baby. We can be going down the bumpiest of kerbs, but the straps keep baby strapped in and held still in place. I take comfort in knowing that for any reason he was to go over in the pram, the straps would provide optimum protection. 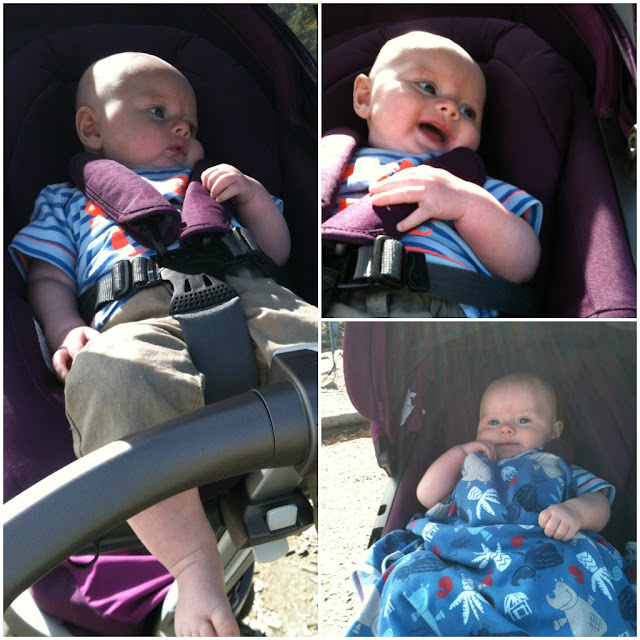 There’s so much adaptability to the Stokke Xplory right from the start. You have lots of different colours to choose from, one which comes with your Xplory and then you have the choice of picking another if you fancied a change. You also have the choice of Summer & Winter kits, and even Limited Editions! 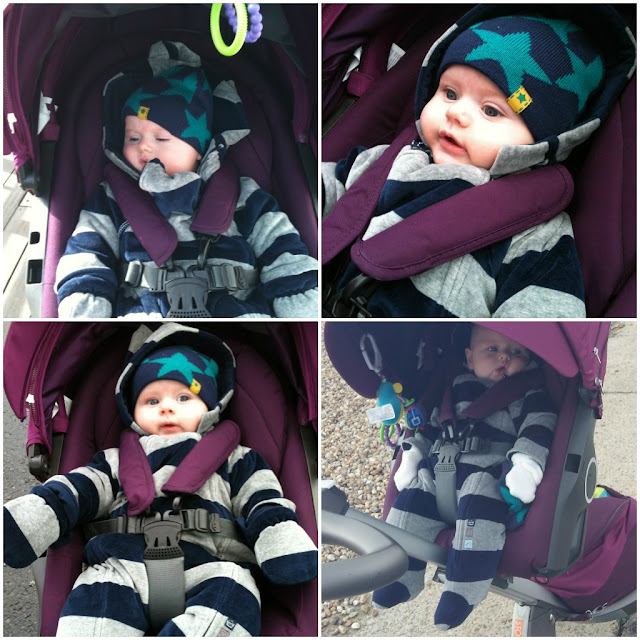 The Stokke Xplory has five seating positions – sleep, rest and active when in parent facing mode and when facing forward – rest and active. We usually have Dylan in the rest mode when out, and about unless he’s sleeping, but now he’s getting older we’re starting to use the active mode more. Especially now that we’ve started weaning, we don’t have to hunt out a highchair or take him out of his pram.

The Stokke Xplory is my ultimate choice for a pushchair and is the pram I will recommend to anyone searching for one. I’ve used so many different pushchairs in the past with Oli, and even now I’ve been trying out other prams with Dylan, but nothing compares to the Stokke Xplory. For us, the height is the ultimate deal breaker. I’ve never come across a pram which enables me to be so close to my child at the same time as introducing my child to the world around him.