Just a couple of weeks ago I went along to the Raddison Edwardian in London for The MAD blog Awards Ceremony. You may have remembered me mentioning in the past that my blog has been voted and put into the finals for Best Pregnancy Blog in the Mum & Dad Blogging Awards. I only confirmed my attendance just a couple of days before as I wasn’t sure how I would do the evening without a baby bouncing around, what made it possible was having the husband in a hotel room directly above me. Just as I was leaving the room to go downstairs for the ceremony, Dylan decided he wanted a feed. So I bought him down with me and sat in a room on my own while the rest of the finalists mingled and drank champagne. He and I had a word; I told him we were going to have this feed and that he was going to go up to his Daddy and that this time apart was going to do us both some good. So this night was the first time I have been away from him since he was born, but it wasn’t like I was that far away – just an elevator away. 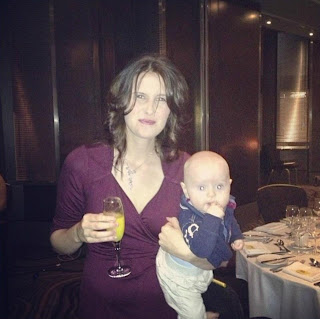 And it did do me some good! I couldn’t have asked for a nicer table; I was able to have an adult conversation with fellow bloggers Susan, Melaina, Clara, Merry & Lindy. I was able to eat with 2 hands and even have a few glasses of wine. The above photo was made possible by Seraphine who sent me the Sweetheart Nursing Dress last minute, which came very handy as during dinner I popped up to settle off Dylan to sleep. A rather beautiful Fiorelli Bead Charm Necklace and a last minute dash to Dorothy Perkins for some flat shoes as I had chickened out of wearing heels. Sadly my colour coordination is way off, but I have ended up with some pretty glittery pink shoes.

I also had make-up done by Arbonne, and my hair was styled by Regis. I felt rather bad when I approached the hairdresser as my hair was an utter mess, thrown into a ponytail that morning as I tried to get 2 children and 1 husband ready to catch a train. She worked miracles and managed to give me a head full of curls and volume. 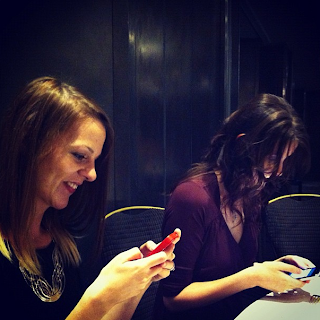 I had a lovely night catching up with old and new friends, eating some delicious food including trying squid for the first time. It was nice to put some faces to blog names/twitter handles. What was wonderful was watching many bloggers that I’ve been following for a while be awarded trophies and prizes for the wonderful blogging work they do. We all as parent bloggers have families and homes to look after so to run a blog alongside this is award-worthy, I would make every blog I followed a homemade trophy if I have either the crafting ability or enough toilet rolls.

Back when I was pregnant I remember getting through some of the days by following others bloggers who were also pregnant, their blogs had become my new must read and I was sharing in their maternity wardrobe and pregnancy woes. My original nomination went to Emma who’s blog I was following each week with her weekly updates, she was just ahead of me, and it was nice to see what was possibly coming up for me. I was sad that she didn’t make the first round but was joyous to see that Alice, Luschka, Jennie and Heather had made the final. I guess this is why I never thought I would win as I enjoyed reading these blogs so much, I even voted and had my money on Alice winning! What happened took me by shock, like totally actual shock. When I heard Liz call my blog name, I was stunned. I had the ladies around me nudging and telling me to go up.

I may have cried, for that, I blame my hormones and maybe the wine. Yes, the wine. I was announced as the winner of Best Pregnancy Blog. I can’t ever recall ever winning anything before and to of won something which represent my pregnancy which resulted in the greatest achievement with the birth of Dylan was a huge honour in itself. To know that you guys thought my pregnancy posts were worthy to of been of nominated in two rounds of voting was a another huge honour. I cannot thank you enough, I’m at the point where I visit my pregnancy mentally as I think about a third child. It wasn’t a easy pregnancy, it was downhill from the moment it started.

Of course, if I wasn’t a crying wreck, I would of gone all out on the thank yous and had of given big thank yous to the likes of you and everyone else who put up with my blog posts and tweets which were nothing but constant moans. Thank you for all your advice and tips and support in general. Jen, Hannah and Luschka who pointed me in the direction of doctors and the hospital when my sickness was no longer just a ordinary morning sickness. Vic & Pippa who were there in so many ways for me. Oli for not abandoning his mummy when she was too sick to play with him. The husband for of course knocking me up and putting up with my despite me having the worst hormones ever and I guess the last thank you is down to my bump, Dylan. The one that I actually carried around for 9 months and who from the outside I was ill, he continued to stay healthy and was born giving me the home birth I had wanted for the last 9months, we’ll ignore the fact we were taken to hospital soon after. 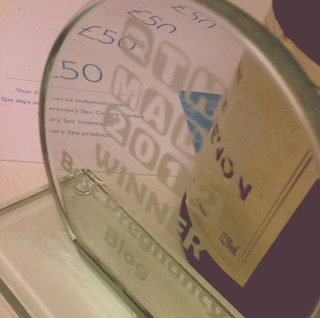 I hadn’t given any thought to the prize as I had no expectation at all of winning and the trophy to me was more than enough of a prize to me along with knowing people voted for me. The spa vouchers from my sponsor New Baby Guides was the perfect prize for me, I’ve never been to a spa before and it’s given me something to look forward to once Dylan isn’t so reliant on me for feeding. I had a fantastic time that evening and I’m so glad I gave myself that ‘me’ time away from the baby.