Ladies & Gentlemen I present to you, ONE POTTY TRAINED TODDLER! 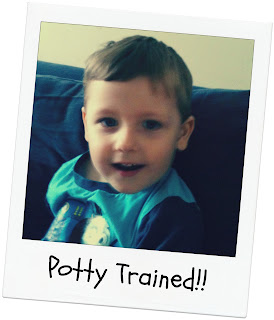 It’s like mission completed, our journey has ended, and we’ve reached the end of potty training. It’s been a long haul but then I think that’s been our fault, we got rather lazy when I was pregnant with the training so maybe could have had this completed sooner rather than later but we’re now there, and big boy nappy pants are no longer needed at all at bedtime. That was the last task for us to accomplish – wearing pants at night. I guess we let him lead the way on that one; it was only at Butlins when he had the whole week nappy dry that I thought once we had got home we could get rid of the nappies. Sadly that first night back in his bed, he wet his nappy and then the next night. I was gutted; I thought we were on to something.

A wise friend who has just been through the potty training journey herself said to me that she just went for it with the pants at nighttime malarkey. Just as I was about to do this, stomach bugs hit the house. Yeah, I won’t go into details but to save myself from a horrid nappy I put a potty in his room and pleaded for him to use that if needs are. We have left his door open for him to use the toilet, but I think he preferred this option. It worked, and it meant no horrid nappy for me in the morning, well not from the toddler anyway *fist pumps air*.

I was happy that we were now on to pants at bedtime but sad that we had the potty back in the equation. So I just took that out of it again by getting rid, so he had no choice but to use the toilet. I do think maybe we need to get a night light for the landing or maybe make the cord for the bathroom light longer so that he can reach it himself in the night. Guess we figure that out, but in the meantime, we’re going to celebrate the fact we’re nappy-less. Yay!