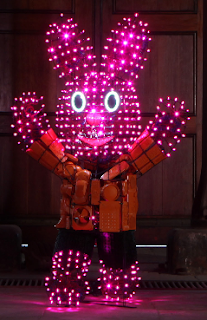 Duracell recently got in contact to chat to us about some new research which revealed that a staggering one-third of alkaline batteries thrown away may still have up to 67% of usable power left inside. Have you ever thought to try those batteries in another device before chucking them away? Just because it’s not powering the Xbox controller anymore might not mean that it won’t work in your TV control. I say that because that’s my secret frugal tip – well until Duracell found this out and my secret was out.

They want to demonstrate that batteries that have been assumed ‘dead’ can be given a second life by trying them in your low drain household devices such as remote controls, clocks and torches. And as we approach that spooky time of year, they’ve pulled together a Halloween party challenge for me to enjoy with the boys. But not only have they’ve given me one, but they’re also offering one of these to giveaway to one of you guys!

The box has all the ingredients for a Halloween party with our little monsters – including decorations, costumes and party games to play in the dark made even spookier by using a torch, run by part-powered batteries that have been rescued from the recycling stream! We’re having a party next Wednesday so expect a follow-up post with photos of our Duracell Halloween party.

To help prevent future batteries being sent to the recycling bin before their time is up, they will also include a pack of Duracell Ultra with Powercheck™. The unique built-inPowercheck technology is like having x-ray vision, allowing you to see the power left inside so you can squeeze out every last drop of available battery juice.  It’s as simple as pressing the white circles on each side of the battery, and the gauge will indicate how much power is left. I dont know about you, but I still find these batteries fun to squeeze at my age! Can be a great way of teaching your little one about batteries & power.

To enter, we would like you to watch the video below and answer the following question – How many LEDs were used to build the Bunny sculpture? See the rafflecopter for T&C’s.