Are you still looking for some Halloween crafts to do with the youngsters? Then look no further than Baker Ross. We’ve recently been recruited as Baker Ross ambassadors where we’ve been receiving some parcels full of lots of craft materials for us to do with what we wish. I’ve still not got round to blogging about the first box but wanted to do a quick post about the second box that arrived last week. Not only did it have the biggest pots of finger paints I have ever seen, but it also had some Halloween crafting supplies as well as some Christmas bits & pieces.

Now what Baker Ross have done apart from introducing crafting supplies to a family who usually shies’s away from crafts is to bring out the inner crafter inside of the man. I never knew it, but he’s rather fantastic when it comes to anything art/craft related. So thankfully my children have at least one parent who knows the difference between Van Gogh & Picasso. He obviously paid more attention to Neil Buchanan on Art Attack growing up, then what I did. 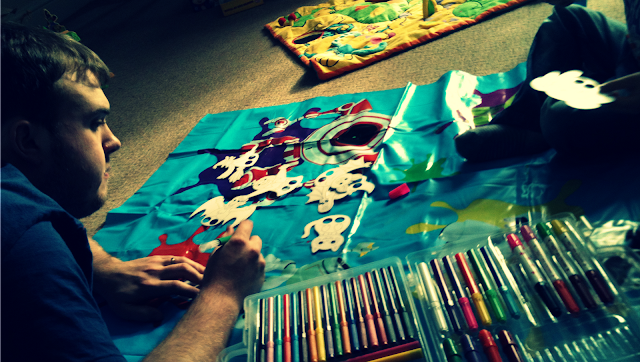 We received some ghoulish characters in finger puppet form to colour in, we all joined in with the colouring in of these. I couldn’t go wrong with an orange felt tip and a pumpkin scarecrow to colour in. We had fun introducing Oli to these various characters and helping him learn the names of them. Our finished characters will be pinned around the house to show off to our guests at our Halloween party. Keep an eye on our twitter feed as we have some fab ideas on what we’re going to with some of the other materials we were sent, including the luminous glow in the dark paint which we’re planning on painting onto some toilet rolls with cut out eyes to pop into our garden bushes. 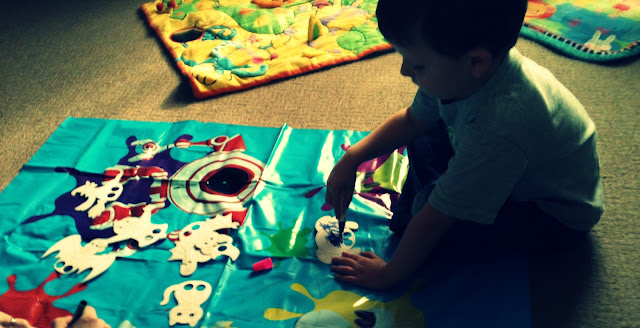 It’s not too late for you to order some Halloween Craft Essentials for Wednesday with Baker Ross’s next day delivery if you order before noon. I’ve used the next day service myself when buying Birthday presents for my nephew so can personally recommend it. They’re also selling Halloween Themed Treats & Toys as well as blogging some ideas on Halloween themed crafts.