Husband’s are just simply big ratbags aren’t they? Mine made the mistake of opening up a pouch of baby food which has been in the cupboard for a while, thinking that the 4+ of it meant four years, not four months. So he opens it up and offers it to the toddler who rejects it with a ‘yuck’, and then hubs turn to me to ask why he didn’t like it and why was I giving him the face of thunder. I explained to him that I was simply saving it for when we were weaning Dylan and in case I ever wanted to use it alongside our planned baby weaning. Oh, the number of times I’ve heard that man come out with ‘oohhhh’ in response to something wise I’ve said.

Of course now this pouch was opened with a toddler who didn’t want it and a life date of 24 hours. I was going to bin it but I just couldn’t bring myself to waste it, so instead I gave it to Dylan. Yep, just days after saying I was going to wait until 6 months and go down the baby led weaning route I choose to start his food journey now. Just goes to show that plans can change as a parent and not everything goes the way you want it too.

Part of me did it after seeing hubs face when going to offer Dylan the juice of something he was feeding Oli and then quickly remembering what I had spoken about with regards to introducing food. It broke my heart to quickly see him draw back and not go with something he wanted to do. He is at the age where this & that won’t do any harm; I should have told him go ahead and do what he wanted that evening. After all, we are both his parents, and despite my obsession with Dylan’s mouth belonging to me, he is his father. 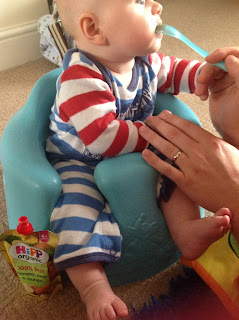 I guess that’s why I took that moment to give Dylan that pouch of flavours and me and the husband took it in turns whilst he was sat in his bumbo chair to feed him. Needless to say he has both his father’s & brother’s love of food and couldn’t get enough of it. That time of introducing something other then my breastmilk came along and passed, I accepted that this is the next stage in our baby journey now. He’s 5 months, almost sitting up and is turning into a right chatterbox already! Maybe mummy needs to start learning to let go a little bit more!

By the way, congratulations HIPP Organic on being the first food to be introduced to Dylan. We had banana, pear & mango which he very much enjoyed and it may grace our changing bag again in the future.