So you’ve heard about the Next Mummy Blogger event now hear about what we wore that day. All 3 of us went kitted out in Next clothes thanks to the £75 voucher they gave us to spend. Seeing as we’re already huge shopping fans of next we mixed some of last seasons wardrobe with the new A/W season. Because we like to mix & match in this house as well as the fact summer seems to be popping his head up every now & again, which it did the day of the event. My outfit mainly consisted of a pair of belted chinos in Blush, which I teamed with a white vest top to make breastfeeding easier and then I chucked over an easy to get to my boobs t-shirt from last season. 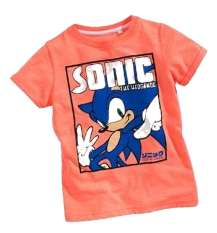 Oli’s was a t-shirt and a pair of denim shorts which I got him to choose himself. He decided to go old school with this Sonic tee.

Dylan wore a rather cute set of dungarees. I am head over heels in love with that stripey vest top that came with it to go underneath. He pulls off stripes rather well, but then he’s so dam cute that he could pull off anything.