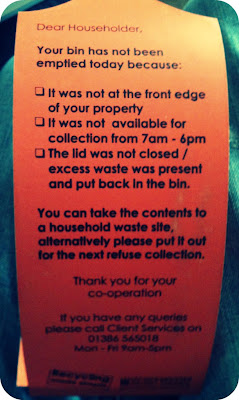 I swear my binmen are just trying to make me go all crazy on them. The day after we moved in and was getting used to being back in our old town, I had a knock at the door. It was the binmen who then walked off to the end of my drive and pointed to where my bin was to go. They were just so very rude and in my gobsmacked state I didn’t say a word, not like I could get one in any way. We had barely had a chance to unpack the kettle let alone find out what day was bin day. I’m surprised with being several months pregnant at the time that I didn’t go all hormonal on them there and then. The man was very angry about the way they spoke to me, let’s just say they’re lucky he’s at work when they come around.

Yesterday though they did take the pee, we had that label pictured stuck to our bin. Being in a rush to get out the house with two little one and trying to get the train on time made us forget to put the bin out. No worries I though as I was on the train, my problem and I’ll just have to wait a couple of weeks to have that recycling taken away or take it ourselves to the tip. What I didn’t like seeing when I got home was this attached to my bin, the fact they had come all the way down my drive to open up the bin to see it had contents inside of it and then label it to say why it hadn’t been taken. I KNOW why it had not been taken; I didn’t need this rude reminder to say so. It’s a fact they took the effort to walk all the way down my drive on my property to check and label it.

They should have just ignored my bin and walked right on the past my house; it’s our fault we didn’t put it out. Am cheesed off, why couldn’t he of took that bin and chucked the waste then and then continue to label it. They know I have children, so of course, we get through lots of recycling and rubbish. I still understand that it was my fault it didn’t get collected but don’t you think it cheeky that they walked all the way down my drive to give me this so called telling off?

What if I was away on holiday and I hadn’t arranged for someone to put my bin out? That would have been a clear advertisement to show that someone wasn’t at home.