John Crane sent Oli one of the Tidlo first balance bikes to try out and review. I have to admit I hadn’t discovered one of these bikes before they mentioned it to me. Poor Oli’s at the age where he’s almost ready for a bike but not quite, his cousin who’s several months older already has a bike, and I know Oli feels slightly left out when his cousin is riding his. This is where I find the balance bike to be a good balance between stages. Putting the bike together was rather simple, it came in 5 pieces which were easy to assembly following the instructions that were included. 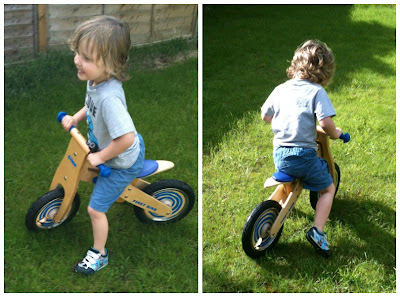 It’s teaching Oli how to balance before he does go up to the next stage of owning a bike with pedals. Our next stage is to adjust the seat for him as it’s adjustable and can grow with him, the bike is suggested from the age of 3 onwards. Great for Oli who only turned three last April.

What I adore about wooden toys is the sturdiness of them, they can withstand toddlers and whatever toddler tantrum they may throw at it. The handlebars have easy grip bars which are perfect for his little hands. I know Oli’s favourite feature about the bike is the bell which comes included with the bike. The bike is pleasing to the eye, the blue isn’t too strong and looks great against its wooden colours.

It has a handle built into its structure which is handy when it comes to carrying it around if your child gets too tired/fed up like they do and you need to carry it. For me, it’s great just to pick up and store in the garage overnight until the next day, and Oli shouts for his bike to come out. Just a shame the weather hasn’t been nice enough for us to play on it as often he would like too. Here’s him riding it around the garden.