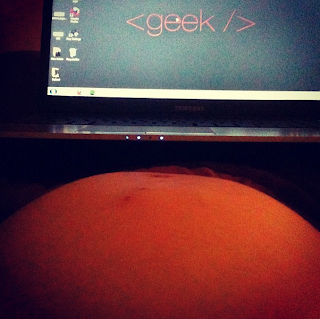 I’m freaking; I’m popping out a baby soon. It’s really started to hit me since I got back from Ireland and my bump decided to go lower, and I just started to feel different generally. I was chatting away with my hairdresser a couple of days ago, and our conversation made me realise that I’m so much more on edge this time around then the first time.

I woke up this morning after a REALLY good nights sleep like I only went to the toilet once which is good considering what the last couple of months have been like. I then freaked because I didn’t feel baby, he always greets me in the morning with a few kicks and punches. He was moving like crazy yesterday, right up until I fell asleep, so it was strange to feel no movement. I don’t know why I got so worked up over it; I guess the way I’m feeling doesn’t help. I just don’t feel like myself, and that usual backache has cranked up a few notches, so I’m currently sat on the sofa with back straight against a cushion. 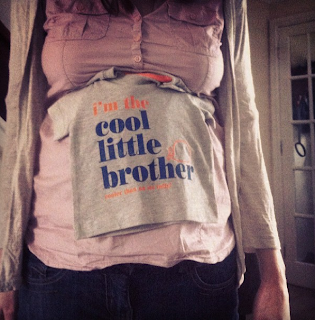 He eventually got moving after a few glasses of the cold stuff, though it could have been the man talking to it and wobbling him around. My twitter friends and the interweb reassures me that movements become less towards the end, maybe I should stop worrying and just enjoy it. I was only begging him yesterday to calm down the movements. Maybe he was just listening to his mummy?

I guess because the due date is getting closer and because the consultant/midwife said he could come anytime really, it’s proper to put me on edge. Any twinge, any feeling which isn’t the normal has me reacting. I think I’m turning the man into a wreck; he’s jumping whenever I get up for the toilet or if I make a funny sound because I’ve been kicked. The baby CANNOT come yet; my legs are staying firmly closed. I refuse to do anything which can even bring on labour.