We were asked if we wanted to review som 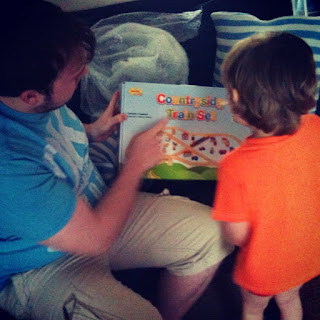 ething from a rather funky looking online toyshop called Play Merrily. They sell pretty much everything a child’s imagination could need in these precious younger years.

For us, it was the Bigjigs Wooden Rail – Countryside Wooden Train Set that we wanted to play with, by us, of course, I mean for Oli to play with. The moment the wooden train set arrived and after Daddy opening it, we had shrieks of excitement. We didn’t have to explain to Oli what it was as it was quite clear from the box. He then had Daddy straight from the sofa to the floor to build it with him, of course, a rather excited Daddy happily obliged.

I guess that’s one of the reasons we’ve put off not getting him a train set until now, I do think a child’s first train set should be one which can be treasured by them for a long time to come. When it comes to a material like wood, it can be something which you’ll struggle to find fault with it. It can withstand the toughest of toddlers; seriously my child doesn’t like to look where he’s going and ends up walking over anything & everything. It’s sturdy and well made providing great value for money. 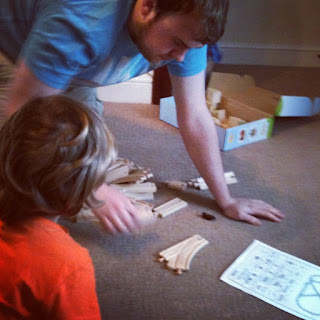 Can’t believe how much came with it, in fact, it comes with 72 pieces. This includes some wooden people, houses and animals as well as some trees. We’re currently teaching Oli his farm animals, so it turns this into educational play without him realizing. He’s also being taught self-independence, there’s only so many times we can build tracks up for him, so we’ve encouraged him to build them himself, the pieces are a great size for his little hands, and they easily slot in together.

It really can create hours of play when you think about all the different tracks you can create, and the fact you have track positions on both sides of the wood helps to create different shapes. It’s also universal, as I type Oli’s already added some of his Thomas trains on to the tracks to join in with the trains he received with the set. Bigjigs have created something which you can add to for few years to come with all the wooden train set accessories they sell, add crossings and bridges and make it even bigger and better. We already plan on using occasions such as Birthdays and Christmas’s to add to his wooden train set. 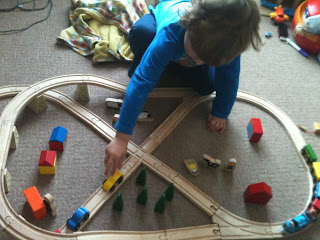 We’re BIG fans of BigJigs in our house, not only do they sell trains and road sets but they also have a huge collection of other wooden toys.

Play Merrily Toys is a family run business, which is my favourite kind of place to buy a child’s toy from. Who can better understand the needs of your child then another family? They also sell arts & crafts, dolls, soft toys and much, much more. The website is easy to navigate around, and you can easily find what you’re after or easily browse thanks to the easy to use menus and simple but fun layout.