The guys over at Disney sent us a copy of Phineas and Ferb’s latest movie – Phineas and Ferb across the 2nd dimension. I’ve left it to Daddy (who’s already watched it with Oli more times then Doofenshmirtz has tried to take over the Tri-state area!) to write a review about the film. 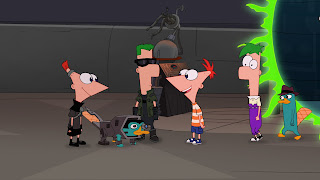 After they are captured and sent to their doom, they manage to escape and return to their original dimension, with the help of the other dimension doubles. When they return, they have to battle against the evil robot invasion. After a hard fought fight they prevail and win the day.

My son already enjoys the TV programme, so it was no surprise that he enjoyed the movie. It’s packed full of fun and colour and has a good array of catchy songs, although I’m not a fan of the sing along with Perry sub-title option. But each to their own I guess. 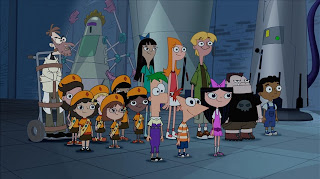 There is a strong message about trust and friendship, and this is shown through the friendship between Phineas and Ferb and their pet platypus. Although they were hurt and disappointed, Perry never told them about his secret double agent life. They love him so much to forgive and trust each other and work together to defeat the evil Dr Doofenshmirtz.

All in all a fantastic movie for children and adults to enjoy. Will have you laughing and tapping your feet along to the songs.