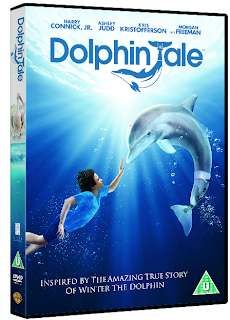 I remember seeing the trailer on the TV for Dolphin Tale and adding it to that forever growing list of films I must see. I have to admit it was the fact it had Morgan Freeman in that swayed it for me, he’s a fantastic actor, and I was curious to see what he would bring to a family film.

Warner Brothers, the guys behind most of our favourite family films, got in contact to ask if we would like to review Dolphin Tale – see it was fate that I watch this film. With Oli not quite being old enough still for the cinema, most of our films are DVDs, and I kinda like this because it means we’re building up a fantastic collection of family films for us to watch now and in the years to come.

Based on true events “Dolphin Tale” is a family film about Winter, a young dolphin who loses her tail in a crab trap and Sawyer, the introverted, 11-year old boy who befriends her. Sawyer meets the rescued dolphin at the Clearwater Marine Aquarium, a marine rehabilitation centre where she lives. Sawyer rallies friends and family alike to save Winter by convincing a pioneering doctor to create a unique prosthetic attachment to restore the dolphin’s ability to swim. Winter, the dolphin, plays herself in the movie.

Oli adores the film; he’s rather into sea animals at the moment so from the moment the film begins you see Dolphins – new word for Oli. 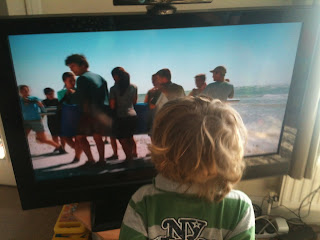 Rather excitedly he shouts about turtles (possibly his favourite sea animal at the moment) and about the bubbles the Dolphins are making. I guess for him it’s all about the animals and he does get to see plenty of dolphin action from Winter. So with regards to recommending for toddler children, we rate it highly. Great learning about sea animals together in such a visual way.

So no worries about him enjoying it, but what about us? When I became a mother, I was worried that my screen life in future would be dominated by silly cartoons and ridiculous films which make me want to fall asleep in the corner. I didn’t think we would be enjoying family films like Dolphin Tale together until he was at least ten years of age, I was so wrong. It was a sweet film which had both me and the man hooked from beginning to end; it’s such a warming tale (get it?) which will have you smiling too.