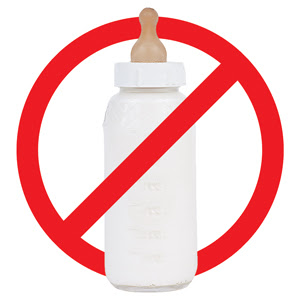 After over two years of using a baby bottle, it’s time for us to say goodbye, well Oli decided it was time to say goodbye. The way I much prefer things to happen, it’s ok for us to say no more but for him to say it shows how much he is growing up. We’ve had such a routine going that it just hasn’t been a thought in our minds to change it, I say bedtime and he grabs blanket and his cuddly toys and walks up the stairs to his cot (next week it’s a toddler bed! Eek!) where he’s put in and then passed his bottle of milk which he curls up with. This was just the way bedtime went for us.

The other night when being offered his bottle we received a scream, he went for some and then gave us this disgusted look and went to bed unhappy. The next morning we found the bottle with the milk still in, the next night he refused it completely. Part of me is pleased, and I know now is the time he should be well away from the baby bottle, but it seemed to be the only way I could get milk into him.

My son refuses point blank to drink milk from any other cup/container or even have it with any cereal in the morning. We knew he liked milk as he drank it at bedtimes, but now he won’t drink it at all. I got given a look of disgust yesterday morning when trying to encourage him by showing him that mummy has milk in her tea, in her porridge and that she even drinks it by itself. But nothing, I even showed him the wonders of adding Nesquik to it to make it chocolate milk, but he still wouldn’t touch it.