As soon as I saw Amy’s post with May’s bake it recipe I just HAD to take part. Pop over and have a look at Amy’s lemon meringue cupcakes and tell me that you also cannot resist have a go at them. We thought they would be ideal treats for when we had Vic over for lunch, sadly we just couldn’t get the meringue just right. Even with our group effort and Vic going to the supermarket to purchase every ingredient possible which we thought would help the meringue go stiff! Here she is attempting to cover the cakes with her 4th batch of meringue. We stuck these in the oven and hoped for the best. What it gave us was cakes which tasted like scrambled egg! I don’t think I’ve cried with laughter as much as I did when I tried one one of those cakes. 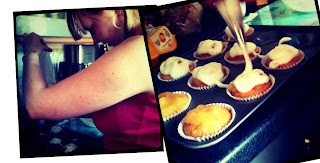