I am not going to lie to you, the very thought of dining out with the toddler makes me want to cry. Doing it has made me cry before. You see I have one of those toddler’s who does not want to stay still. You know the kind, the one that gets bored after just a few minutes of something and would rather be running around like a headless chicken then sitting in a highchair at a table.

So when Most Wanted – The lifestyle magazine from VoucherCodes.co.uk asked us to help find out exactly which nationwide restaurants are the most child-friendly, welcoming and serve up the best value-for-money-fare, I kinda screamed inside. I love going out for food but he enjoyment gets taken away from it when we take the toddler with us. So whatever restaurant we go to have a challenge on their hands as to keep us happy, they have to keep the toddler happy. Along with some other parent bloggers, we checked out one of our local restaurants as a family to see exactly how family friendly they were. 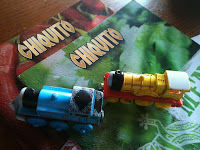 We choose Chiquitos which is one of the top nationwide restaurants in the UK. We decided on Chiquitos because we’re BIG fans of Mexican food in this house and that includes the toddler who cannot get enough of his fajitas and chilli con Carne (must have been all that spicy food I ate while pregnant!). We chose the right time to go with a toddler as the place was empty apart from another family and a bloke. It was evening-ish just about 4.30 so after the lunchtime rush and before the evening rush. 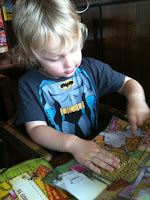 We walked in and had to wait a few minutes for someone to come and show us to our seats; he had our back to us, and I guess he was dealing with a customer’s bill possibly so cannot fault him for that. He showed us to our table and asked us what we would like to drink; he asked if Oli wanted a drink and we said that it was ok as we had bought his juice cup. He then went off to get our drinks; he hadn’t suggested a highchair (Oli was currently in his pram) which I saw by the front door as we walked in so I went and got one myself. When he came back with the drinks, he had some chips ‘n’ dip for us and a Chiquito fun pack for Oli; this contained some colour crayons, a colouring sheet, stickers and some play cards. This is something which makes me smile when we go into a restaurant! Every place which encourages you to bring a child to eat, like if they have a children’s menu should offer an kids activity pack for the children. I had bought toys and even crayons along myself just in case we didn’t get anything, but these were not needed. Oli set about entertaining himself while we browsed the menus. 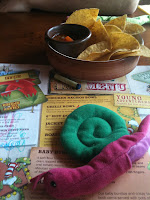 We were quite impressed with the children’s menu; there was a wide selection to choose from including both mini Mexican dishes and normal English dishes such as hot dogs and chips or fish fingers and chips. They had a deal going which the menu stated for £4.99 you get the main menu, desert and drink for the little one.

We had long picked out what we wanted before the guy had returned, which was a little annoying. When we do go out with the toddler, we like to speed things up so that less time is spent just in case Oli likes to have an episode. We had well so far managing to keep him sat in his highchair with which the fun pack helped. We ordered both mains from the main menu and ordered Oli a chilli con carne from the kid menu. The guy was quite friendly, and I was quick to forget my annoyance, he interacted with Oli and spoke to him and even offered him a high five which impressed our two year old. 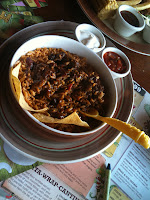 The food came quite quick which I expected to see as the restaurant was practically empty. We were quite impressed with our meals, sadly we made the mistake of going with chips instead of salad on our plates, and that was it. The toddler refused to touch his meal after seeing chips were being served. Even sneaky parent ways of chopping up a chip and sticking it on the fork with some of his chilli didn’t tempt him. I guess I should have ordered him the hot dog and chips. I was impressed at the size of the dish for a toddler; it also came with sauces which were quite sweet. I noted that the menu said it would offer a discount if a child under 12 wanted something off the main menu which also impressed me. 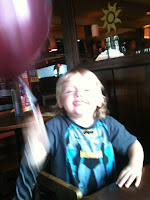 During the meal, we got asked if everything was ok which we replied yes. When the guy came and collected our plates we asked if we could take Oli’s meal home with us to serve when we got home, he took it away with him to wrap up. We asked for the bill as we couldn’t stay any longer as the chips had ran out and the boy was starting to get restless. I was secretly hoping that the guy would point out that the price of Oli’s meal included a drink and a desert, and that he would offer for us to take the drink home and even just ask if we wanted the dessert. He didn’t. I suppose I should have asked, but I kept wondering if he would point it out to us at any time during the meal. We paid the bill which was a reasonable price for a family of 3. The guy asked Oli if he wanted a balloon which was, of course, was a yes. 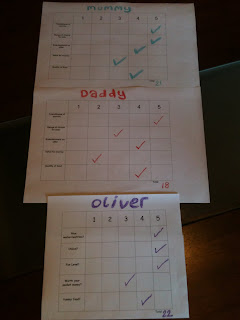 To the right is the score sheets that we filled in when we got home. As Oli’s not quite enough to answer or do his own, we filled in what we thought he would say if he could.

Daddy gave a high score of 5 for the friendliness of service but a low score of 2 for the value of money. He was unimpressed with his main meal; he didn’t think that the £11.99 he paid for his southern fried chicken were worth it as his plate has just a little bit of chicken on and chips. I agreed with this. Even with the sweetcorn on the side, it didn’t match the price we paid for it. Daddy’s Score – 18/25

I gave a high score of 5 at both the range of choice for kids and friendliness of service as the guy was lovely to us all and especially Oli. I did give them a low score of 3 for the value of money as not mentioning what we could have got with Oli’s meal had annoyed me. Mummy’s Score -21/25

Oli’s score sheet asked is the waiter was nice which he was so we gave him a 5; we also gave a 5 for the choice and the fun level. Sadly a 3 for was it worth his pocket money because of what mummy mentioned about the meal deal. For where it said yummy food? We gave it a four as Mummy tried the chilli and it was rather yummy, Oli would have enjoyed it if his new found chip addiction hadn’t got in the way. Oli’s Score – 22/25