Yep, I’m now a full-fledged mother to one two years. I guess I can officially say I now own a toddler. Not a baby or an ordinary child but a toddler. I hear it’s also called ‘that evil stage’. We’ve already witnessed the beginnings of some rather delightful tantrums which involve a screaming child lying on the floor until he gets bored and forgets what he was tantruming about. He has an attitude too which involves a major lack of impatience. It’s not all been tantrums and attitude though, he’s turned into a proper little boy who has been learning the ways of the world he’s still not speaking, but he knows how to communicate with me to let me know what he wants.

At the same time as turning two, he’s dropped his night feeds; he’s sleeping through the night. Which means I get a lovely 7 pm to 8 am out of him, sometimes even a 9/10am start! I can hear you saying lucky cow through gritted teeth. This is fantastic for me because of 2 years of having to wake in the night and give him a bottle of milk I now get to experience full nights sleep again. 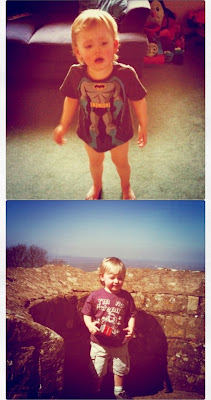 We celebrated turning two by visiting a local farm to see some animals and see the lambs being born, Oli changed his mind about the lambs when he got there and saw the Chickens. They were much more interesting then the cute baby lambs being born, so we spent a good hour pointing and following the chickens every move.

We’ve had so much fun over the last few weeks, totally making the most of our family time before we explore him going into a nursery for the first time. I still can’t believe the baby days are totally behind us, as I get his baby stuff down from the loft over the next few days I know there’s going to be a tear or 2 shed.