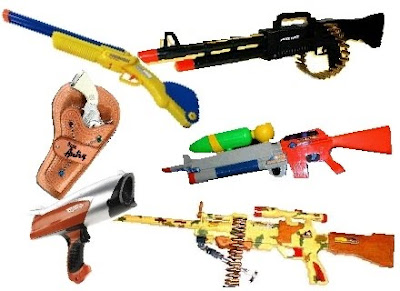 Ever since I can remember, like way back before I had Oliver and long before I was even old enough to be a Mother. I always swore that no future child of mine would have a play toy gun or toy knife as a play toy.

Now I’m actually a mother I still stand by what I said and feel the same way about giving children weapons as toys. There’s just something in my head that sees it wrong for a 5/7/10-year-old playing with a toy version of something which isn’t very pleasant at times. I love the imagination children have and think encouraging it is great but by giving them a toy gun to pretend to shoot somebody? I just don’t see what is normal about that.

I don’t have anything against real guns at all; I believe they can do good in protecting our armed forces and the police when needs are necessary. I even posses marksmanships in shooting a .22 rifle and an L98, most weekends I could be found down the shooting range. But this was when I was a teenager knowing that what I was doing was for sport and was in a safe, controlled environment.

You probably think I’m silly, and that surely they’re just pieces of plastic that can’t do any harm. I know as much as the next person that giving a 5-year-old a toy gun to go ‘bang bang ‘with isn’t going to turn him into some mass murderer. We live in a country where guns are not popular household items so it’s not like they will get there hands on a real gun and try to roleplay with it. But still are we not to teach them that guns are bad and are not to be touched? So why do we stick a plastic one in their hands?

I remember my brothers playing with this kind of toys when we were younger, and I hated them then, I hated the fact my mother bought them and encouraged them to role-play games such as let’s point this toy gun/knife in my sisters face and pretend we want to kill her. It used to upset me that they played in this way, I know kids cant always be innocent, but the moment my mother let them have them as toys she let them believe it was ok to ‘pretend’ to shoot me.

What do you think about toy guns? Harmless fun or not?