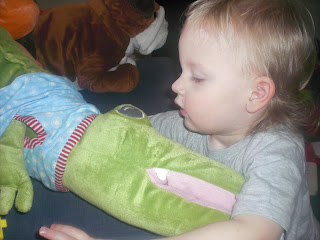 If your little one is into cuddly toys then why not head over to your nearest IKEA store where they have the cutest selection of soft toys on sale. Oli got sent from IKEA a Fabler Krokodil, Fabler Mus, Barnslig Alg and Gosig Bulldog to put to the cuddle test and to see what he made of them. By far his favourite is the rather large Fabler Krokodil which has been cuddled, wrestled and even slept with!

Little Miss Fabler Mus went to the house of Oli’s little friend where she is now taking part in little tea parties and having girly cuddles. She would make the perfect gift for any little girls birthday.

The Barnslig Alg or the moose as we call it in English takes pride of place on Oli’s highchair; I guess Oli wants it to keep his seat warm for him. It’s amazing how he has bought out his imagination to place his cuddly toy here; he’s attempted to feed it peas which he is somehow convinced is moose food. 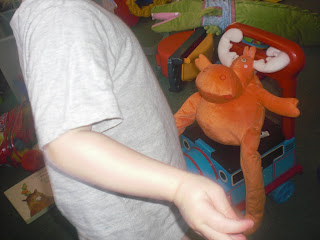 One new friend is the Gosig Bulldog which he sees as a great cuddly toy. This somehow keeps making it up into my room, Oli keeps sneaking it up there. I’ve been trying to teach him that it’s a woof woof and that we stroke dogs, actually got some progress on calling it a woof woof but instead of stroking it Oli finds him to be more of a rather comfy seat.

Recent findings from a research report called the play report from IKEA from that 89% of parents agree that play is important to encourage their child’s imagination. Which as a mother of one toddler I have to agree with, every day totally I find Oli using his imagination to play with his toys in a different way. Just as I noticed the way, he turned his new IKEA soft toys into objects of play by using his creativity. 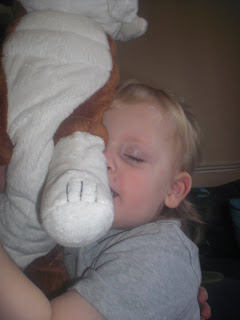 IKEA has created an engaging new Facebook application called ‘Toy Stories’ which offers kids the chance to interact with a range of characters to create their story. Oli and I had lots of fun sitting at the computer to do it together, I wrote and made the story and read it out to him. If you have older kids why not let them write and create their story. You also get the chance to print it out and share it with friends and family at the end.